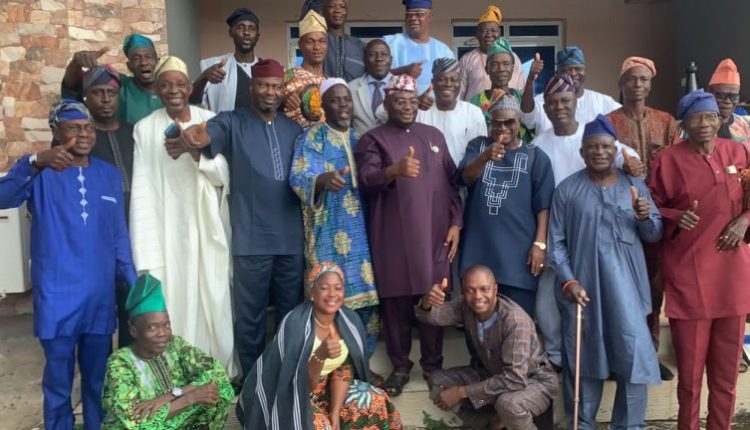 The break-away faction of the All Progressives Congress in Oyo State, The Unity Forum, on Sunday met with Former CBN deputy Governor Cheif Adebayo Adelabu. The Forum, which is made of many aggrieved Oyo APC faithful, have been protesting the irregularities and injustice been perpetrated in the party decided and have decided to forge ahead in Accord party.

The Unity Forum, who are adherents of the Late Bola Ige political dynasty, Late Alhaji Lam Adesina called Lamists as well as some former commissioners under the immediate past administration including former local government chairmen during Abiola Ajimobi Administration and about 80 per cent of the elders caucus of the party in the state are unanimously united and have drummed support for Chief Bayo Adelabu governorship ambition in the 2023 election.

The members of the forum who were at the Adelabu penkelemes foundation house Jericho yesterday agreed to mobilize the electorates across the geo-political zones of Ibadan, Oke-Ogun, Ogbomoso, Oyo and Ibarapa to vote for Accord party in the coming general elections.

Receiving the Party Cheiftains, Cheif Adebayo Abdul Waheed Adelabu who had also served in capacity in both pubic and corporate sectors noted that he remains one of the highest employer of labour in Oyo state with investments in Real estate, finance, agriculture, hospitality and tourism promise to create programmes and ideas that will enhance the economic prosperity of Oyo state as well as making it a hub for industrialist.

The Agba Akin parakoyi of Ibadanland promised to re-engage all unduly sacked workers, prompt payment of salaries and allowances as well as ensure frequent training of public and civil servants if elected as the governor of the state.

Adelabu who has recently been receiving political stalwarts, organisations and defectors into Accord party, notified them of the official affirmation as Governorship Candidate slated for 3rd of August, 2022 at Liberty Stadium, Oke Ado Ibadan. He enjoined them to make it a date to witness the rebirth of his governorship aspiration on that day and the renewed journey towards the emancipation of Oyo State.