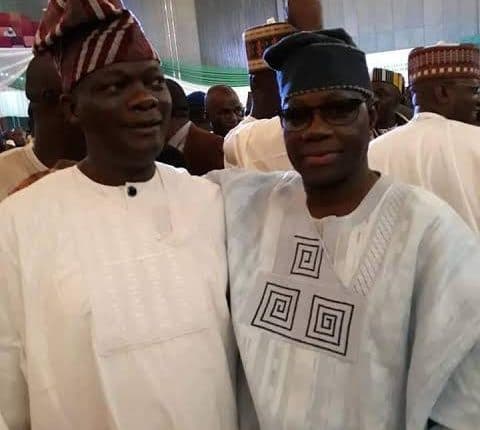 In a two-in-one event similar to using one stone to kill two birds, Teslim Folarin, lawmaker representing Oyo central, will be declaring his gubernatorial bid while his colleague in Oyo south, Kola Balogun, who recently joined the All Progressives Congress, APC, will be formalizing it.

Tomorrow is the day and venue is the Oke-Ado, Ibadan secretariat of the party in the state.

Folarin, who is in his third term, in the presence of party faithful, supporters and lovers who have been mobilized for the event, would be revealing why he wants to be governor.

The Ibadan senior chief, who will soon be elevated from his Ayingun Olubadan to a bigger title, is one of the 6 APC governorship aspirants who have bought the party’s interest of expression and nomination forms.

Balogun, a former commissioner and incumbent senator, will also be publicly announcing his defection into the APC tomorrow.

”Fortunately, though unknown to the two senators, they have chosen the same day. That is why we are a doing a two-in-one event tomorrow. Folarin will be declaring his guber bid officially while Balogun will be making his first public appearance as an APC member tomorrow,” a party source who didn’t want name in print told OYOINSIGHT.COM.

Balogun, who is the youngest of the brothers of Oba Lekan Balogun, Olubadan of Ibadan, was forced out of the PDP recently.

He will be battling the likes of Adesoji Akanbi, Kolapo Kola-Daisi, Adegoke Adegboyega, Oseni, Bimbo Adekanmbi and host of others who may still obtain the senatorial forms in Oyo south.