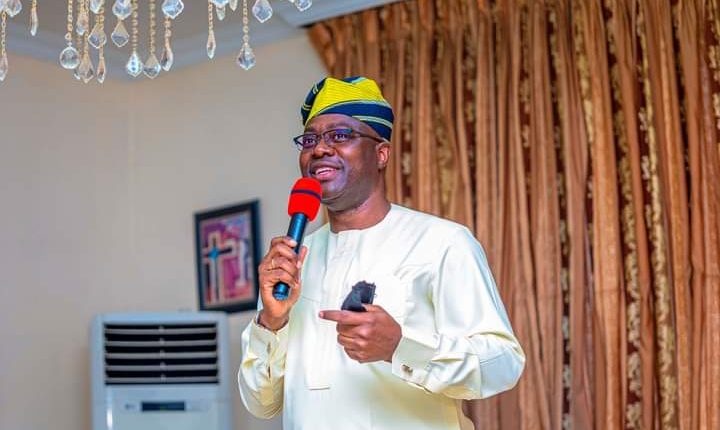 Reports reaching Akéde Ọ̀yọ́ now is that the Executive Governor of Oyo State Engr Seyi Makinde is currently in a crucial meeting with all the 11 Kingmakers that make up the Olubadan-in-Council.

The meeting is currently ongoing at the government house Agodi Ibadan.

Akéde Ọ̀yọ́ recall that in a meet held Oja’ba palace of the Olubadan of Ibadan land, Mapo Hill, Ibadan on Thursday

The meeting was also attended by coronet-wearing Baales promoted with the High Chiefs as well as some Mogajis.

The Osi-Balogun, High Chief Tajudeen Ajibola, who briefed reporters on the outcome of the meeting, explained they supported Governor Seyi Makinde’s decision to revert to the original concept.

He recalled that the process of nominating the next Olubadan, which the kingmakers concluded on Tuesday and passed to the government, was done according to the original concept under reference, disclosing that all the kingmakers signed their respective titles as high chiefs.

He said: “We agreed with the Governor. All the processes leading to the nomination of successor to the late Olubadan were in line with the original concept of line of hierarchy in accordance with the Olubadan Chieftaincy Declaration.”

Ajibola, who is one of the Kingmakers, posited that commenting on the case in court “is subjudicial” noting ”it has nothing to do with the original concept of hierarchical status in the succession plan to the Olubadan throne.”

As at the time of filing this report, the meeting between the Governor and the High Chiefs is ongoing while the press will be briefed at the end of the meeting.

In Ibadan: Man Divorces Wife For Turning Home To A Boxing Arena, Stripping Naked to Fight With Tenants

Ladoja Affirms Lekan Balogun As Next Olubadan, Says We Have Resolved All Controversies