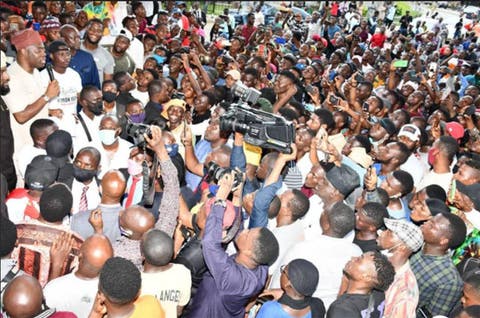 DETAILS: Oyo Youths Divided Over N1 Million #EndSARS Gift Given To Them By Makinde

In an unfolding development, more than twenty student leaders in Oyo state are currently slugging it out with bribery allegations making the rounds among concerned EndSARS protesters and students in different institutions in Oyo state.

The student leaders, who organised a candle night in memory of those who lost their lives at the subsided ENDSARS protest, were alleged to have been invited by the Oyo State government for a stakeholders’ meeting in a bid to quell all unsettled grievances.

The meeting, which was before the candle night slated for 4 pm began, had in attendance different representatives from different spheres including artisans, tricycle leaders and about twenty six student leaders from the University of Ibadan, Polytechnic Of Ibadan, Ladoke Akintola University of Technology (LAUTECH), National Association of Nigerian Students (NANS) and some other Alumni and youth leaders.

According to the Oyo state government, the stakeholders’ meeting was to discuss various issues they want the state government to address. However, after the meeting, a sum of one million naira was allegedly given to the youth representatives who debated on whether to share or return the money. In the end, majority of the leaders allegedly favoured sharing the money.

Investigations are still on-going on the culpability of some of the representatives.

Sunday Dare To Rivive Abandoned Youth Centers Across The Country

EndSARS: 46 Residents Have Reported Infractions and Rights Abuses Of Police Brutality So Far—Makinde