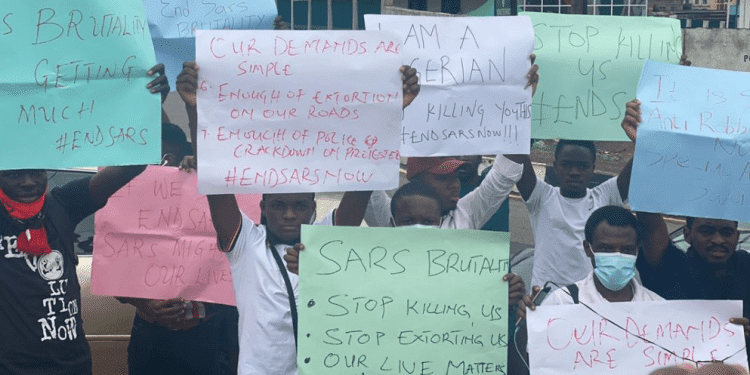 A group of protesters under the aegis of the Concerned Nigerian Youth stormed Ibadan on Wednesday Ibadan, the Oyo State capital, demanding for urgent proscription of Special Anti-Robbery Squard of the Nigerian Police Force.

The protesters, carrying different placards with different Inscriptions like ‘ OGA SARS, I want to see another day’ Our demands are simple-Disband SARS’, I am a Nigerian, stop killing the youth’, and others, maintaining that the nefarious activities of the SARS personnel had sent a lot young Nigerians to their early graves.

“We are not satisfied with the step taken by the Inspector General of Police. In some states while SARS was banned they were still operating. It means that there is no they are above the law. Is SARS not under the IGP?”

They cause more harm than good in Nigeria.  They have embarrassed, harassed, kidnapped, extorted and killed thousands of Nigerian youth.  They are called Special Anti-Robbery Squad. What is their business with the youth?”
In his remark, the Coordinator for Coalition for #Revolution Now in Oyo State, Solomon Emiola, said, “We are here protesting the brutality of Nigerian youth by the Police, especially the SARS. The rate at which they harass the citizens is so high.

“We are calling on Mr President, the Senate President and the Speaker to scrap SARS. We say no to it. The harassment is too much. Anywhere they see you they would harass you. Without asking questioning, they would say you are under arrest.

“They had killed so many youth. If we fold our arms without telling them that enough is enough, it means the future of this nation would collapse. Therefore, we say no to that. SARS should be scrapped now.

Fayose Faults Makinde, Bode George Over Attack on Him At Ondo PDP Rally