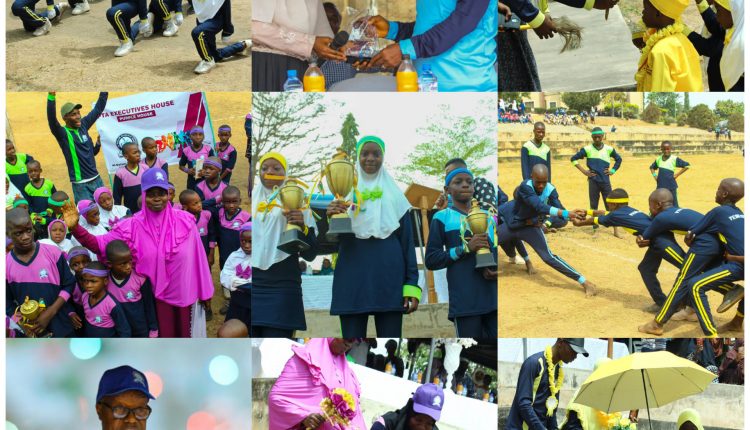 One of the best Islamic Faith School In Oyo State, Al Qalam Schools has again Set the record’s straight on why they’ve remain the best since the school was established in 2006, the 3rd biennial Inter-House Sport Competition which took place at Carmelite Sports Field, Ekerin Ologuneru area Ibadan, was well attended by dignitaries across all works of life.

Al Qalam is known for portraying the best professionals in Islamic faith Studies, Principle’s, expertise, well experience teachers, this attributes has put the institutions value at top most among its peers.

The chief host and Director of Administration and Finance of the school, Alhaji Otun Isiaka Ajibola, revealed that this year’s inter-house sports competition held with collaborations from parents, staffers, stakeholders, and the school management.

Also in attendance at the programme were Dr. Adegbite AbdulRafiu, Engineer Maruf Sadiq, and other prominent dignitaries. The event featured Quran recitations by Isah Abdul’Lateef and Oginni Khadija (two students of the school) and other attractions such as:
Parade
Races – 25 metres, 50 metres, 75 metres, 200 metres, and relay
Tug-of-war
Sack race
Search for coins
Strapping of babies to the back
Egg race, and
Father’s Shoe.

Given the overall performance of each house, Green House came tops with 474 points, Yellow House came second with 456 points, Blue House came third with 434 points, and Purple House brought up the rear with 416 points. Fifteen schools in the vast Ologun-Eru community were invited for the sports competition and they participated in the primary, junior, and senior races.

It is worthy of note that parents and old students of Al Qalam Schools also took part in the competitions. In the races, Abdullah Sulaimon, an alumnus of the school, emerged winner in the male category and Yusuf Faridah, a former student, won the female category.

A Muslim educational school established in April 2006 and located at Zone B, Olonde Estate, along Eleiyele-Eruwa road, Al-Qalam Schools educates the ideal Muslim child based on pure Islamic tenets. According to the school administrator, Otun Ajibola, Al-Qalam is managed by a team of Muslim professionals who has excelled at taking the institution to new heights.

“These individuals identified [the] need to fill a great gap existing within [the] Islamic-faith school system and the country at large with their collective efforts through an ideal Islamic creed, expertise, knowledge, and experiences,” Ajibola said. “At present, [the school offers] qualitative education with morals based on pristine Islamic teachings – to nurture [the] ideal Muslim children who shall influence the globe positively…”

The Director of Academics, Hajia Otun Rukayat Abimbola, expressed satisfaction that pupils at Al-Qalam have been making the Islamic and academic communities in Oyo State and beyond proud. She said the just concluded biennial sports competition was targeted at promoting mental and physical fitness among students at the school. She added that classroom studies must be balanced with extracurricular activities.

“Learning should be a total process that must not be limited to classroom and field works,” Abimbola enthused. “It must include psychomotor activities geared at mental and physical development through sports, debates, public speaking, and art. We adopted competitions of this kind to teach students teamwork, skill-building, emotional stability, interpersonal communication, physical tolerance, and mental perseverance among others.

A cross-section of parents and other stakeholders lauded the management of Al-Qalam Schools for the success of the third biennial inter-house sports competition and said they look forward to another competition in another two years.