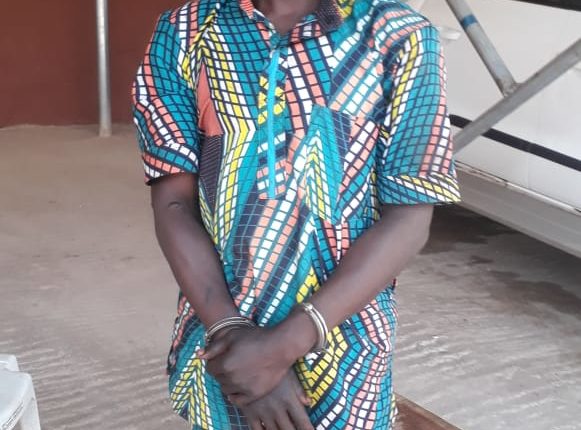 ‘How I left correctional Centre to restart life before my arrest’

Muyideen Olalekan a.k.a Oogun Po, who was one of the inmates of Abolongo Correctional Centre in Oyo Town, that escaped during an attack by gunmen on October 22, 2021, has been re-captured by operatives of Oyo State Command of Western Nigeria Security Network (Amotekun Corps).

Olalekan was recaptured on Monday at Aba Nla, Muslim area, where he went to show a pastor (name withheld) a piece of land he intended selling to him.

Tribune Online learnt that the runaway inmate had been in Ibadan since his escape from the prison and had been working as a bricklayer after changing his religion.

He was said to have joined the evangelical church immediately he got to the city without the pastor having an inkling of his past deeds.

The commandant of Oyo Amotekun, Colonel Olayinka Olayanju (retd) told the Tribune Online that his men got information from good-spirited members of the public that the prison inmate escapee was back home, which made the personnel be on his trail.

“We were on surveillance for about four days. Fortunately, the people reported that they saw him with two others moving to a particular area. We sent a team to go and arrest them. We knew the inmate but didn’t know the other two, so we had to keep them with us till this morning to ascertain their status. During interrogation, one of them claimed to be a pastor who asked his brother to convey him to where he wanted to buy land which a member of his church, Muyideen, said was owned by him.

Tribune Online was present when the recaptured inmate was being handed over to the officers of the correctional centre in Oyo.

Shortly before the handing over, an interview was held with Muyideen on how he was able to escape from the prison on the day it was invaded. He narrated thus: “After we were arraigned in court for ritual murder, we were remanded in Abolongo Correctional Centre, Oyo.

“On Friday, October 22, I was on a sack, sleeping when fellow inmates came to wake me up, asking if I could not hear gunshots. As I listened, I heard the gunshots and was wondering where they were coming from. Everyone was standing, alert. It was about 11 pm.

“Suddenly, we saw men who were not of Yoruba tribe. They were Fulanis. They were saying ‘Allahu Akbar.’ I couldn’t see their faces. We were so many and it was dark. They broke the doors and started ushering us out.

“Every inmate ran out of the cells, and I also did. I started walking in the forest and didn’t know that I was facing Ogbomoso. I was coming across many inmates in the forest. But we were not communicating. “When I got to an opening, I saw truck drivers and asked for the way to Ibadan. I was shown.

“I started trekking and got to Ibadan at about 3 pm on Saturday. When I got home, I saw a family member who was surprised to see me, asking me what happened. I had initially thought of going to Abuja or Lagos. But I had the feeling that God is omnipresent and that I would be rearrested. A spirit told me to surrender my life to Jesus and shun sinful life.

“That made me go to a church at Ojoo. The pastor prayed with me and started counselling me. It was noticed that there was a change in my life.

“When I first came, I called my mother who stays in Abuja. She advised me to go and report myself at the Amotekun Corps office, saying that I would just be running and hiding, and would not enjoy any freedom. But I was afraid and didn’t go to report myself.

“Before then, I used to drink a lot of alcohol and smoke cigarettes but I became calm. I was baptised, but none of them knew what happened to me before I joined the church. I started my job as a bricklayer.

“I have a piece of land and shop I inherited from my late father. I wanted to sell it and purchase a machine to start a concrete block making industry.

“On Sunday, January 9, I went on the land to check the pillars. On Monday, I took the pastor whom I persuaded to buy the land and his brother to the land. I also intended to collect shop rent that was due for payment.

“As I wanted to collect money from the occupier of the shop, I was surrounded by Amotekun Corps and arrested.”

On what took him to prison, Muyideen said he was involved in the death of a 73-year-old man, Pa Adeniyi Samuel, for ritual purposes.

“He was killed and dismembered in my house. I was the one who called him to come to my house. I connived with other suspects arrested with me. When the idea of killing the man came, I did not reject the move. One of the alfas brought a knife. He was the one that strangled the elderly man. The other one held his legs. I was the one who was first given the knife to cut off his head, but when I couldn’t complete it, it was done by one of the Alfas. He went away with the head while the remains were left in my house. After he left, I came to my senses,” Muyideen recalled.

In his explanation, the pastor said that it was Muyideen’s aunt who brought him to the church counselling and prayer, saying that he was a family member who was ready to dedicate his life to Jesus.

“She asked me to pray for him. I preached the word of God to him and led him to salvation. The aunt did not give me any information about him and she’s a member of my church. Muyideen told me he is a bricklayer and staying in Lagos.
“In December, he told me that he had property he inherited from his father that he wanted to sell. I even advised him against it but he said he wanted to use it to start s business.

“That was when I decided to check the land. I told my cousin to convey me there in his car. We were there when we heard shooting. We thought it was robbery so we decided to leave to save our lives. But we just saw a motorcycle carrying persons crossing our vehicle and we were ordered to stop. We thought they were the neighbourhood security. That’s how we were arrested. “Muyideen’s atrocities were exposed to me when he was being interrogated, and it is still a kind of a shock to me.

“I’ve learnt not to trust everyone that brings a stranger to me. One should try to investigate first,” the pastor said.

Makinde Breaks Silence, Reveals How Next Olubadan Will Emerge