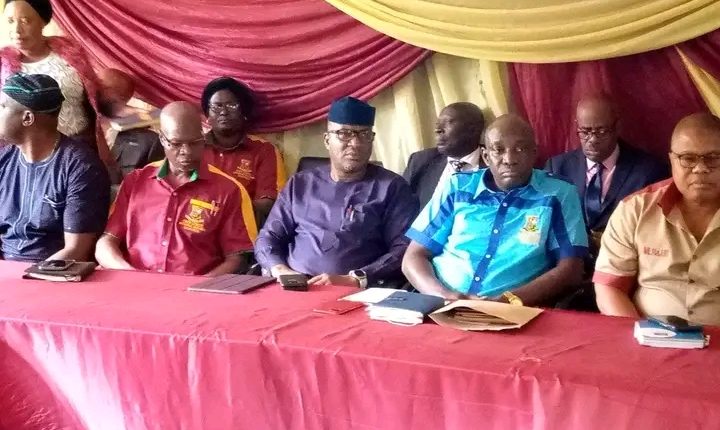 As part of measures to regularize tax collection and shore up internally generated revenue, Oyo state government has launched a new app for electronic collection of other road taxes in the state.

The app according to the developer, will in no small measures block financial leakages, fraudulent transactions, improve on government-taxpayer relationship in terms of confidence building and guarantee improvement on expected revenues.

Lamenting the impact of what he described as ‘cutting corners’ and financial leakages by emanating from sharp practices by tax collection agents and conniving tax tax payers, Awakan said, anyone found attempting to engage in such act will be made to face the full wrath of the law.

While fielding questions from journalists shortly after the event, the OYIRS boss said Oyo state is introducing IT into other road taxes because lots of funds were being lost to sharp practices stressing that government is resolved to improve on revenues generated from other road taxes in the coming year and beyond.

While acknowledging that Oyo state has improved on its current IGR compared to what it generated last year, Awakan said part of the forecasted challenges of the new app is the consistency of internet availability especially at rural areas, adding that the new app is designed to work offline effectively. He however, noted that offline transactions can be downloaded on the database afterwards when there is internet access.

“I can tell you some of these things can be done offline, we’ve discussed that and looked into it. In fact there are some areas you’ll go and won’t even find internet at all or bad network reception. So, they will be able to use the device offline and after leaving such place you can then download what you’ve recorded.” Awakan said.

Speaking on measures put in place to prevent saboteurs from frustrating government’s efforts on the new initiative, Awakan said, “if you are caught trying to cut corners, the first thing is I will revoke the agreement we have with you and hand you over to the ministry of justice for prosecution.

“I’ve arrested so many people this year who were trying to cut corners. Some have been taken to court for prosecution and we will continue in that line. Now I’m the one warning and begging people to comply, but when you come back to beg me after cutting corners I will not listen to you.”

Awakan however, said, no fewer than 7 persons were being arrested on almost weekly basis trying to engage in sharp practices by trying to cut corners and deny government’s what’s due to her, saying it’s the civic duty and obligation of the people to pay taxes to government in order to provide developmental projects and programs.

The app developer, MD/CEO of ITC Advisory Services, Mr Tunde Adaramaja in his address lauded the government of Governor Seyi Makinde for consistently improving on the state IGR since inception of his administration in 2019 without pushing additional burden on taxpayers urging stakeholders to comply and give government the needed maximum cooperation.

According to Adaramaja, the new app now requires a super agent who is directly answerable to the state government to have unique personal information including NIN, username, and password inputted on the app to access all the available features installed for ease of electronic tax collection. He added that the super agents will in turn be required to have sub agents who will also be required to go through the same process.

The app which is designed to work effectively on mobile phones and designated Point of Sales (POS) machines, will be remotely monitored by the app administrator to prevent any attempt to commit fraud at every point of trying to access the app, Adaramaja stated.

“We want to enhance a lot of things that’s why we called for this kind of meeting for us to have consultation with you and to have your buy-in, and for you also to have understanding of the rules of engagement so that we’re all on the same page. There will be trainings and retrainings of our super agents and sub agents to enable them have full grasp of the workability of the app.

“The issue of digital and automated tax collection is the in thing now all across the globe. His Excellency has repeatedly emphasized his commitment to consistent improvement on the state’s IGR. We know where Oyo state was before he took over in 2019 and we know where we are today but still we want to continue to improve.” Adaramaja said.

The Acting Chairman of the umbrella body of all revenue collectors in the state, the Oyo state Mobile Advert Association, Mr Mojirola Kazeem Balogun in his remarks assured the state government of his association’s maximum cooperation while also noting that an internal sensitization program will be organized for the members to abreast them of everything expected of them by the state government.

Others present at the event include representatives from the ministry of finance, ministry of environment and natural resources, Oyo state Signage Agency, and other relevant ministries and parastatals.