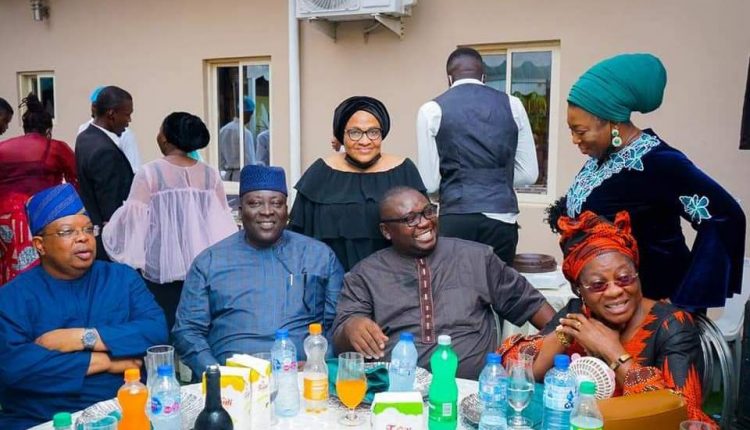 Immediate past First Lady of Oyo State, Dr (Mrs) Florence Ajimobi at the weekend hosted selected chieftains of the All Progressives Congress, APC in her Oluyole residence.

While speaking, the former First lady said her desire was to uphold the legacies of her husband, one of which was the to follow up on the peace process that he embarked upon before his transition.

She added that she’s not interested in politics and in any political position.

Her words: “One of the things on his mind was to ensure that peace reigned in Oyo APC. He wanted all the different factions to come together.

“I am not interested in politics, I am not aspiring for any political position. As a politician’s wife, I can only support as I have always done when my husband was alive and I will continue to offer that support. “

The former First Lady had hosted members of the APC family to Iftar and extended the weekend hosting to those who could not be accommodated during the period. The event was a who’s who in Oyo State APC family.

The weekend of conviviality started on Saturday when the National Assembly members stormed her residence.

The following day, was the turn of the victorious ALGON team.

Present were all the 68 local government chairmen now referred to as Forum 68 who were all in ebullient spirit over their victory. They were led by the State Chairman, Prince Ayodeji Abass- Aleshinloye.

Also present were all the governorship aspirants and the party gubernatorial candidate in the 2019 election.

Earlier on Saturday morning, she had played host to some members of the Ajimobi Legacy Forum (ALF).

Each of the guests paid glowing tributes to the late Immediate past, two-term governor, Senator Abiola Ajimobi.

They nostalgically recalled his tenure that witnessed unprecedented infrastructural development in the State.

Most paid glowing tribute to the state of peace and stability that was the hallmark of the administration.

They equally showered encomium on Mrs Ajimobi for her initiative that has led to the coming together of the various factions in the State APC.