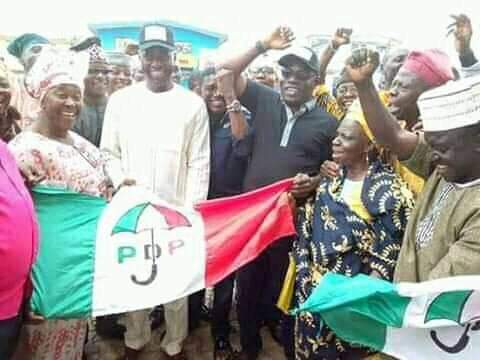 INTERVIEW: How I Single- handedly brought Makinde back to the PDP in 2015—Olopoeyan

A Chieftain and leader of the People Democratic Party, Alhaji Abdulrasheed Adebisi popularly known as Olopoeyan, has recounted his active role in the emergence of the incubent Governor of Oyo State, Engr Seyi Makinde.

During the last Eid-el-Kabir celebration, the governor of Oyo State, Mr Seyi Makinde, was at your residence to celebrate with you. This development at that time suggested that the rift between both of you had been resolved. But very recently, a 32-second video footage went viral on the social media space, where you were seen ranting about the fact that the governor has not rewarded you accordingly for the support you gave which according to you contributed immensely to his emergence as governor in 2019. Could you please shed more light to this?

Ordinarily, there has been no time that the governor had decided not to pay me a visit during Ileya festival, he comes every year since we knew each other. He usually come visiting during eid-el-fitr festival until I decided to suspend it because some of my followers wanted to be using the opporunity to take alcohol of which I do not like. So, his coming to my house during ileya is just the usual which has been happening for quite sometime.

In the video, you emphatically said you worked tirelessly during the electioneering process which brought governor Seyi Makinde to power, what are those things you did which you can say qualified you to be specially appreciated?

Before the footage that went viral, the meeting has been on for close to two hours, but I reacted that way when someboy talked about those who have left the party. The governor knows I really contributed in no small measure to his emergence. There is nobody in this state who can say he or she did more than I did during the 2019 governorship election. Even the governor knows nobody worked for him to emerge more than me beacuse I was the one who single-handedly brought him back to the PDP in May 2015, we both had a meeting in London shortly after he lost the governorship election on the platform of the Social Democratic Party (SDP). At that time, he told me he was tired of politics and that he was not interested any longer. But he told me if I can help talk to leaders of the party in the 33 local government areas of the state, he would be willing to return. He specifically told me that the mistake he made was the fact that he did not really have a very strong relationship with the real determinants in all the local governments. And I started working, even at that time, the PDP was in a state of comatose, virtually all the key elements of the party had left. I was the one who brought the party back to life at that time when I started Reformed PDP to lure those who have left the party to return. At that time, when Makinde was still in SDP, people accused me of engaging in anti-party activities because I was hobnobbing with Makinde. I was the one who reconcile him and the likes of Hosea Agboola, Mulikat Akande and the rest of them. The first meeting he held with Agboola was at Farinto’s house in February 2016. It was at that time I changed the name of Reformed PDP to Aseyori Seyi Makinde (ASM) and we used to have our meetings at Supreme Hotel, Ibadan. Also, seven of us founded what we called Oyo First, myself, Bisi Ilaka, Mulikat Akande, Demola Ojo, Sharafadeen Ali and Senator Femi Lanlehin also joined us but later some people pulled out because they all felt the agenda was for Seyi Makinde. The point I am trying to make is that at that time, none of those who are benefitting from the present administration in the state was there. Those who are claiming to be part of us now, came after the election had been won. After I spoke angrily in the video, I saw a comment from someone on social media talking about the issue of money I mentioned. I know excatly what I am saying, It is not because I am hungry or I needed money to finance my family. I bought this house in 1992, I am not a poor man, I have built houses in this city of Ibadan even before joining active politics. When I say some people are suffering I was not referring to myself, If you worked for somebody to achieve his or her dream, you should be duly compensated. All those people that we worked together during the election are always in my house, they need to be  compesated for their efforts. I am not asking to be Commissioner or any other appointment but our people should be considered for something reasonable in this government. I am not asking for money, all I am asking for is to fix my people who we worked together to bring forth this administration. I do not have any child in the employment of the state government despite the fact that I have eight of them who are graduates. Those who are outsiders running their mouths like a car with double exhaust cannot understand what we are talking about as they are ignorant of happenings in the political circle. I have not left this party for once and everybody can attest to that fact. The person representing Oyo South in the Senate is an outsider, it was few months to the election that he joined us, this is what we are talking about. He does not even talk to me but I do not actually care, I am saying all these so that the people would know how things are going. I have had cause to deal with governors in this state, I had a very good relationship with Akala, even the late Ajimobi whom we were not in the same political party. So those people running their mouth like I said do not know anything, their sense of reasoning was borne out of the fact that their mind is poverty-ridden and cannot think aright. I am only fighting for the party, we cannot afford to fold our arms while useful members leave the party.

On Saturday, the Commissioner for Local Government and Chieftaincy Affairs, Mr Bayo Lawal, while featuring on a radio programme, described you as a political chicken. What would be your reaction to this remarks?

You know we have two elders, the good ones and the opposite. Bayo Lawal belongs to the category of the opposite. He is just unnecessarily angry because we are together in Ibadan North East here and he knows how valued I am. It was with the present Chief of Staff to the governor, Bisi Ilaka who brought Bayo Lawal to come and join us in our group then. Why he is feeling important now is that he has been made a Commissioner. To me, he does not have any value, why he is thinking he has value is the appointment. As far as I am concerned, he does not possess the qualities to occupy such sensitive public office, the reason I said this is that, you will discover that when he was first appointed, he was taken to the Ministry of Special Duties, I am sure you know what that means. I want to believe you are also aware of the fact that he ought to have been the Senator representing Oyo South, but the ticket to contest was withdrawn from him and given to somebody who is just a stranger in the party. That is to tell you how important he is. I am 100 per cent convinced that the governor did not ask him to go and say all what he had gone to say on radio. I believe the governor would still ask him why he has said all what he said because Bayo Lawal is just poised to disorganise the party.

Away from all that has been said, how would you rate the present administration in the state under the leadership of governor Seyi Makinde?

I do not know anything about it. I have not been to the government secretariat so it would be very difficult for me to know what transpires there. Just like you listen to government’s activities on radio is the way I listen too. I was not involved in any form of government activities. It is a known fact that I am not a government appointee, I have not applied to be one. So there is no way I could have been in a position to evaluate this present adminstration. When I saw Dr Saka Balogun, the chairman of the PDP reconciliatory committee and his team, I was wondering and I had to ask: Are we fighting?

On a final note and for the information of the people of Oyo State, are you still a member of the PDP?

I remain a PDP member, I am not going to any other political party and nobody can chase me away. I have been an integral part of the party since 1999 and it would be foolhardy of me to say I want to leave at this pint in time, not for any reason. In 2015, I remain the sole voice of the PDP, a lot of people can attest to that fact. Therefore, I am not going anywhere.