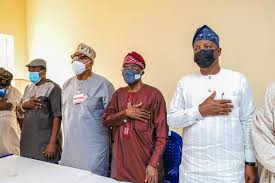 Sunday Dare, minister of youth and sports, has dissociated himself from the Oyo All Progressives Congress, zoning committee reportedly ratified by the Elders Advisory Council ahead of the October 16 congress in the state.

The Otunba Alao Akala-led elders advisory council, had reportedly approved a 9-man committee to oversee the zoning and planning of the fast approaching state congress.

The committee is expected to have its inaugural meeting tomorrow, 7th of October at the State Party Secretariat in Oke Ado, Ibadan.

Reacting to the news of the zoning committee, Dare expressed his displeasure at the conduct of some Oyo APC party chieftains, which he said is inimical to the needed unity the party needs to win in 2023.

“Critical stakeholders in Oyo APC were not informed or carried along in the selection of the members of this zoning committee. This is wrong. Consultations were scanty, selective, deeply biased and overbearing.

“At this stage, all critical stakeholders must be informed about any step being taken towards the state congress. It is the only way to foster peace.

“The chances of Oyo APC in 2023 elections will depend heavily on unity and team spirit. We must have an all-inclusive team and shun personal interests at this point. The primary aim of every stakeholder in this party should be victory in 2023. We must not give room to divisive factors at this point, if we indeed want Oyo APC to emerge victorious at the polls,” he explained.