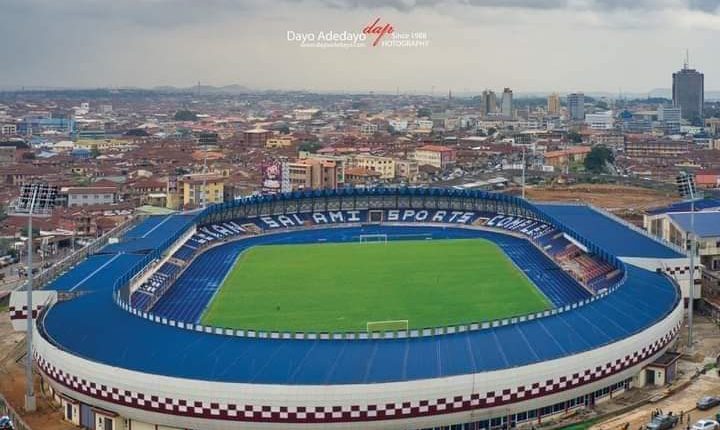 There are insinuations that the next Super Eagles home matches would be hosted at the Lekan Salami Stadium, Ibadan in 2022.

It was gathered that Teslim Balogun stadium did not meet the minimum requirements to host an international game according to a letter CAF sent to the Nigeria Football Federation, therefore causing the national team to look for a stadium outside Lagos, for their matches.

The Nigeria Football Federation, NFF is currently looking for a new home for the Super Eagles ahead of the 2022 World Cup Qualifiers playoffs.

Meanwhile, Lekan Salami Stadium is the only stadium among the 5 stadia listed for Super Eagles home matches, which is yet to host the Super Eagles, after reconstruction works were carried out there and commissioned on September 1, 2021.

AFCON 2ND ROUND: Buhari In Video Conference With Super…

The N5.5bn renovated stadium which is located in Ibadan the Oyo state capital, has a 20,000 seating capacity.

With the recent ban of the Teslim Balogun Stadium in Lagos from the execution of Super Eagles international matches starting from the 2022 World Cup playoffs, it implies that Nigeria Super Eagles will have to play in Ibadan or any of the four other stadia in their next home fixture.

Meanwhile, the newly remodeled Lekan Salami Stadium, Adamasingba, Ibadan; remains the only stadium yet to host the Nigerian team playoffs as Super Eagles will be playing outside Lagos, in their next home fixture.

Makinde’s Ally Akika Bags Award, For His Contributions And Support For Islam