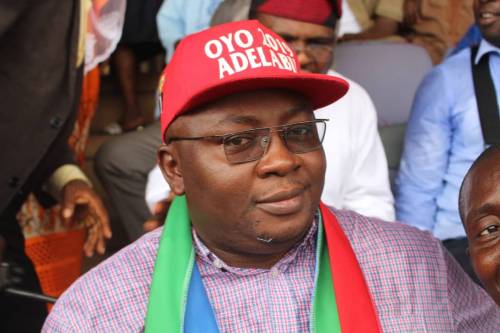 A former deputy governor of Central Bank of Nigeria (CBN) and frontline All Progressives Congress (APC) governorship aspirant in Oyo State, Chief Adebayo Adelabu, has denied reports that he has defected to the Social Democratic Party (SDP).

Following his loss in the Oyo APC governorship primary election last Friday, the media space was awashed with the news that Adelabu has defected to SDP on Saturday.

Though Adelabu did not show up at the venue of the APC primary election, Sen. Teslim Folarin had defeated the former CBN deputy governor and the other aspirants at the tension-soaked election.

Explaining his absence at the governorship primary election in a statement released by his media office on Saturday evening, Adelabu said he cannot be a party to a “conglomeration of political jester.”

MY NON-PARTICIPATION IN THE IGNOMINIOUS CHARADE THAT TOOK PLACE AS APC GOVERNORSHIP PRIMARY IN OYO STATE ON FRIDAY, 27TH OF MAY, 2022.

Gentlemen of the press.

My dear and distinguished supporters, loyal party members and well wishers, warm felicitations to you all.

Yesterday, precisely Friday, the 27th of May, 2022, an ignominious charade took place in Ibadan, the capital of Oyo State, which has been referred to as the Gubernatorial primaries of the Oyo State chapter of our great party, the All Progressives Congress (APC). The gathering is nothing but a conglomeration of political jesters; whose delegates list was concocted by the beneficiary of this political shenanigan in the person of Senator Teslim Folarin a.k.a Ja’agba.

I, as a leading aspirant decided to stay away from the gathering of Senator Folarin’s court jesters, for the basic fact that I got to know that the delegates list to be used at the governorship primary has been compromised and a new one formulated by the main arbiter who was to suprintend and supervise over the primary election in conjunction with their paymaster in the person of the same Senator Ja’agba. In short, the main delegates list sent from our great party’s National Secretariat had been corruptly compromised with names of non delegates included and even to the extent of people impersonating the real delegates and illegally voting on their behalf.

I could have attended the political rabble rousing event yesterday in protest, but I figured out that attending such would lead to a compromise of the peace of the people of Oyo State. I had it at the back of my mind, the violence caused by the same actors on the 29th of December, 2010 in which the NURTW Oyo State Chairman then, Alhaji Lati Eleweomo and two others were murdered in broad day light, when our Senator of PDP then, was struggling and strangling for power over the people and resources of Oyo State.

Mindful of the fact that my ambition should never be a cause to spill the blood of those I intend to serve, I decided to stay back from the money guzzling political frolic that took place yesterday. If I had attended in order to foist the flag of truth and honesty at the event, it may have engendered an unnecessary bloodbath yesterday. I give all thanks and praise to the Almighty Allah that I had the calmness of mind to stay back from those that engenders violence instead of peace where ever they go out as political carpet baggers in search of self aggravating power.

I am soberly aware with my numerous supporters that some very dangerous elements are all out to hijack the soul and body of APC in Oyo State and I assure you that all legally and constitutionally possible means shall be engaged to halt them and safe our great party from their leprosy infested crooked fingers; for the people of Oyo State are entitled to a life of peace, a viable economy and prosperity with great infrastructural development devoid of violence and wanton destruction of lives and property.

I hereby use this opportunity to plead with my supporters throughout the nooks and cranny of Oyo State to remain calm and law abiding. We shall in the shortest time ahead inform you all of my next line of action.

The provision of a more abundant life for the great people of Oyo State is non-negotiable.

This is to put it on record that I didn’t participate in the Charade called Primary election as the Delegates lists were manipulated.

My attention has also been drawn to my purported defection to Social Democratic Party after the just concluded kangaroo Primary Election of All Progressives Congress. While I’m still consulting widely with political associates, community opinion leaders, families and friends, I’m categorically stating that I have not defected to any other party whatsoever, but my final decision will be communicated to you all at the end of consultation in a matter of few days. All I can tell the whole world for now is that I am going to contest in the 2023 General elections as a Guber candidate, no matter what. This is the only reason why I left my groovy career as a Deputy Governor of the Central Bank of Nigeria in 2018 and no amount of intimidation, threat or harassment can stop me from my passionate ambition of revolutionising the political, social and economic landscape of Oyo state through machinery of government.

As of today, I’m not a member of SDP or any other political party as being widely circulated by media organisations. Appropriate steps will be taken after consultations in due course. What happened at Liberty stadium Oke Ado at the Governorship primary election of APC was nothing but a show of shame and mockery of APC internal democracy. I fully dissociate myself from such mockery of our political system. The one day delay in conducting the primary was meant to enable them perfect their act of manipulation as nothing stopped the committee from conducting the election on the original date fixed. This foul play was quickly noticed by me, hence my decision to opt out of the shameless process.

I, however, appreciate all my followers, members of the APC and good people of Oyo state, home and diaspora who were disturbed about the purported Governorship Primary Election of the party. I advise them to remain calm and to continue to be law abiding citizens pending the time final decision will be made on this unfortunate situation.

Thanks for listening and may ALLAH’S Blessings remain with you all.