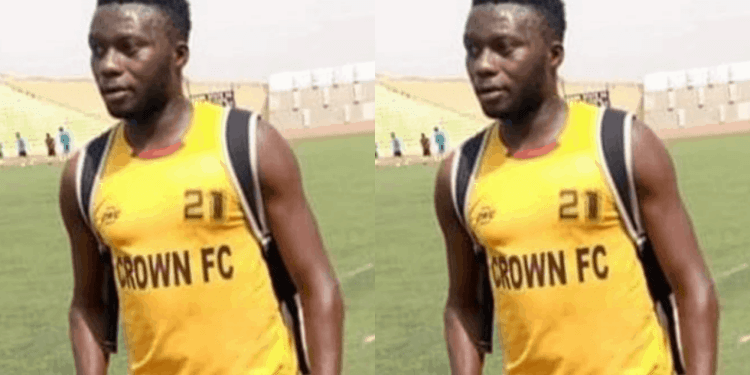 A football player with Crown Football Club, Ogbomoso, Oyo State, slumped and gave up the ghost during a match in Abeokuta, the Ogun State capital.

The Punch reports that he slumped during the match but was resuscitated by the medics.

“Usman Yusuf who came on trial played the first half in a friendly for Gateway United FC against Sliema Wanderers on Sunday afternoon, during half-time he showed bad signs and Gateway United team doctor attended to him.

“It was later in the night, a call came in from camp that he had suffered a relapse, swiftly he was taken to State Hospital, Ijaiye where he gave up the ghost,” Moses Ojewunmi, Media Officer of Gateway FC, said.

Meanwhile, the management of the club in a statement through it’s media Officer, commiserated with the family of the deceased and Gateway United FC. They described the deceased as a hard-working and resourceful player.

It reads: “The Management of Crown Football Club of Ogbomoso has sympathised with the family of her former player, Usman Usein, and Gateway United FC, where the player died while on trial with the Abeokuta Side.

“Eiye, as the former Crown FC and 3sc player was fondly called, died on Sunday 15th November, 2020, where he was said to have been confirmed dead by the State Hospital in Ijaiye, Abeokuta, the Ogun State Capital, while featuring in a friendly game for Gateway United FC against Saliama Wanderers.

“The deceased was a member of the historic Crown FC team that played in the Semi Finals of the 2017 Aiteo Cup Competition.

“Eiye, was a very hardworking , dedicated and loyal member of the team until early 2020 when the Ogbomoso football giant dispensed with his services .

“Crown FC sympathizes with his family in this grieving hour and prays for God to grant them and Gateway United Football Club the fortitude to bear the irreplaceable loss.”

The Men of Facts are Still Around: Hon. Akínrẹ̀mí Jagaban Joins Prof. Olowofela in Asking Gov. Seyi Makinde to be Guided