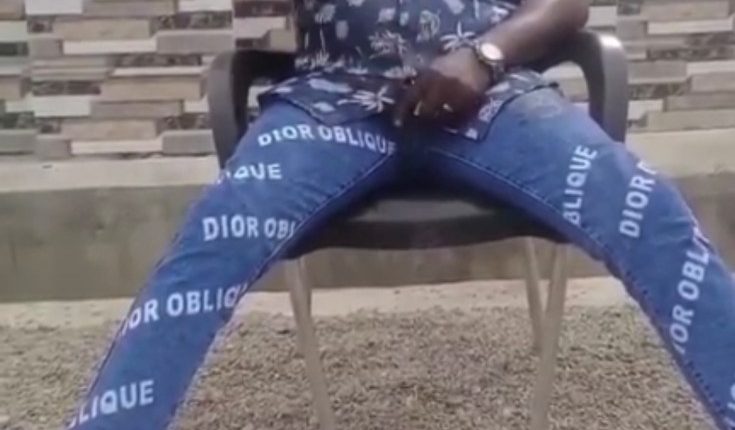 VIDEO : Auxillary Blows Hot, Warns Oyo APC Guber Candidate Sen Teslim, •”Your Recruited Militants Can’t Kill Me Like They Did To Others”

The chairman of the disciplinary Committee of Oyo State Park Management System (PMS), Alhaji Mukaila Lamidi (AKA Auxillary) has raised eyebrows over a video making the rounds, where he was seen sending a warning to the Candidate of the Opposition All Progressive Congress (APC) in Oyo State, Sen Teslim Folarin.

The Video Which was Obtained by Akéde Ọ̀yọ́, the furious Auxillary was heard saying, you can’t kill me like others, I’m too big for you to kill same way you did to others.

Auxillary said in the video that, let me advice you, All the militants you’re recruiting can’t do me anything, you call yourself a man, forget it, if you dare me, i will win this battle over you.

Go ask about me, I’m a warrior and I’m not afraid of people like you.

Watch the video below

The Video has since generated many opinions as some say it’s a threat to the life of the 3rd term senator and the Guber Candidate of the Oyo APC. While others think he’s only warning Teslim Folarin from any nefarious plan towards him.

“A felon who was convicted for manslaughter and illegal possession of firearms can threaten to kill and kill!

“This man’s illiteracy is malignant – it is a cancer that will ultimately destroy him,” she added.

@animolekun: These are legacy that are wrong, how can a known thug be able to do this? Gov Ajimobi of blessed memories put him, others away then including ekugbemi moshood that killed other thugs. Oyo state government should act on these

@ade_nurayn: Well, if anything happens to Sen. Folarin, Mukaila Auxillary is in soup.

@tunmishe_: Well, Tessy is not a small fry too. The last time Tessy mentioned Auxiliary’s name, Auxiliary was fidgeting.

@sodiq1313 : Politicians empowering thugs will never make sense to me sha,some people will say politicians use them,and my question is to do what exactly?most of these thugs don’t even vote and I can’t remember the last time serious political violence happened in SW too.I might be wrong sha

@hyperopique : Dem kill my guy Ramon because he packed his car in front of his mum’s shop.

@fadipeolusegun: I hate how this nuisance became so powerful and untouchable under this government. The governor continues to turn a blind eye to his atrocities.

@SegunEfficient : This is the man acting as deputy governor of Oyo state. He is Seyi Makindes right hand man. For those of u shouting on Twitter that u don’t know anything, this is what Oyo has become under your performing governor.

@hafizayokunle : I’ve heard nothing but news of bad incidents about this man since he came to “limelight”!

@_profseyi: This is the right and best time to put an end to his shenanigan. I witnessed how his boys beat up innocent citizens during olubadan’s coronation. The DSS should pls do the needful.

@MrKakaki: I’m sure he has never been to yellow house before

@Hon_Danjo : Two people I blame for these utterances are

They are in power now nah. 😅