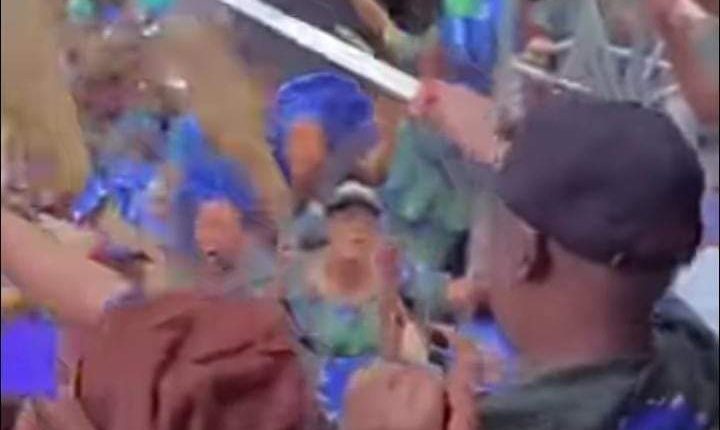 Your Brazen Display Of Sword In Public, Reminds The People Of Eleweomo’s Murder, Call Folarin To Order—Oyo PDP Tells Police

The ruling People’s Democratic Party (PDP) in Oyo state has raised a security alert over the brazen open display of sword which was described as an invite to anarchy in a democratic setting calling on the state security agencies particularly the Nigerian Police to immediately call the senator to order.

The party said such flagrant show of indicorum in public exposes the deep thought and mission of the senator who was once remanded in Agodi prison by the Court over his alleged involvement in the death of factional leader of the proscribed National Union of Road Transport Workers, NURTW, Oyo State branch, Alhaji Lateef Salako, a.k.a Eleweomo.

According to a press release by the Oyo state publicity secretary of PDP, Akeem Olatunji, and made available to newsmen, the memory of Eleweomo’s gruesome murder is reawakened by the sight of such action which the party said is capable of creating an impression of a violent electioneering season in the state as the nation prepares ahead of the forthcoming 2023 general election.

Enraged by the video that has since been trending on social media, the ruling party alleged that reckless and unguarded comments and remarks emanating from the camp of the All Progressives Congress (APC) in Oyo state must have been engineered from sources within the opposition camp to cause mayhem in the state against members of the ruling party under the guise of playing politics.

“We want to immediately and urgently call the attention of the security agencies in Oyo state particularly, the Nigerian Police, Oyo state command, to the indicorous act of brazen open display of a weapon at the venue of official declaration of Senator Teslim Folarin’s governorship ambition.

“The world must be urgently put on alert based on Folarin’s political antecedents with regards to political violence especially as involving the gruesome killing of Eleweomo in cold blood. The people especially security agencies in the state must also be reminded that this same Folarin had in past threatened to unleaseh terror on the good people of the state via his mischiefs and treachery plots in form of his failed traps (pakute) against Governor Seyi Makinde, which he and his cotravelers on their path of political perdition attempted and failed.

“We in the PDP strongly believe in the spirit of sportsmanship in our evolving democratic process. The ultimate sovereign power lies with the people and any informed politician with genuine motives will understand that to gain such power he or she must adequately sell him or herself to the people to secure their mandate.

“It is therefore, unimaginable to say the say the least unthinkable, that a serving senator of the federal republic seeking to govern the good people of Oyo state will resort to the garage politics of violence showing might of violence instead of selling ideas and personal image to the same people he is seeking to govern.

“The alleged involvement of this same Folarin in the gruesome killing of Eleweomo readily comes to mind with such ugly sight that greatly ridicule the image of the Nigerian Senate being a member of the hallowed chamber.

“From the time Oyo state government through the ministry of Public Works and Trabsport created the Park Management System (PMS) with a view to develop the transport sector and improve its revenue base, and also appointed Alhaji Mukaila Lamidi, a.k.a Auxiliary, as the agency’s Chairman, the APC in Oyo state has particularly engaged itself with increased and endless false propaganda and blackmail against the state government.

“After relentless criticism and several failed ‘pakute’ by our ‘Mr pakute setter’, Senator Folarin, both the party has since lost its voice to criticize Lagos and other APC controlled states in the south west for adopting Makinde’s performing template in the transport sector.

“It is on record that after the proscription of NURTW in Lagos by the Lagos state government, the Lagos state Park Management System was established with MC Oluomo as the Chairman. Sadly, Folarin and his other ignoramus about the workings of government have continued to exposed their ignorance by relentlessly trying discredit the Oyo state PMS and its workforce.

“We must educate Folarin and his cotraveler that playing opposition is not being foolishly blind to laudable government policies and programs, it is infact an act of political naivety by political opportunist who in their very narrowed mind believe that it is only by brazenly displaying a sword to the people that would communicate what Folarin in this case is capable of in terms of political violence and causing fear in the minds of innocent residents.

“We call on the pragmatic and proactive Oyo state Commissioner of Police, CP Ngozi Onadeko to immediately call Folarin to order with his unrestrained desperation to govern the state after his woefully failed attempt in 2015. We as the ruling party will not fold our arms and watch a man who should know the implication of sending violence signals to scare the electorates from coming out to perform their legitimate civic duties at the forthcoming polls.

“We want to state that Folarin and his cotravelers should not mistake our full respect for decorous politics and respect for all political aspirants in the forthcoming general election for weakness, we shall not hesitate to as a party use every legitimate means within the confines of the law to tame Folarin’s unrestrained desperation to govern Oyo state by all means.” The Oyo PDP’s statement said.