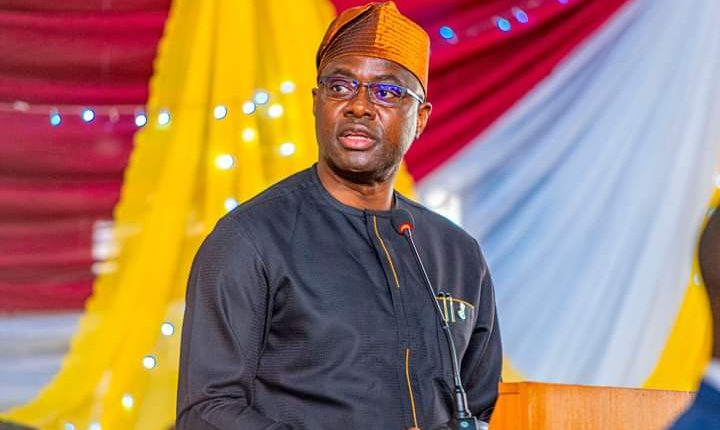 Oyo State Governor, ‘Seyi Makinde, has declared his readiness to reconcile all contending interests within the Peoples Democratic Party (PDP) in the state.

The governor, who was speaking at the state’s 2021 Christmas Carol of Nine Lessons, held at the Remembrance Arcade, Government House, Agodi, Ibadan, also announced the approval of 13th month salary to workers in the state.

He said that his administration will continue to improve on governance in the state, adding that the people should expect more dividends of democracy in 2022.

A statement by the Chief Press Secretary to the governor, Mr. Taiwo Adisa, quoted him as saying that civil servants in the state will receive the 13th-month bonus on December 27.

“This is your government; come and we will reconcile everybody.”
The governor further said: “I want to thank the people of Oyo State for your support. This is the third edition of this Christmas Carol but everything has been possible because of the prayers you offer for this government.
“I also want to seek your further support for 2022. You may or may not be aware that 2022 is going to be a defining year, as it is the year that we will choose candidates in political parties for the 2023 elections.

“So, we have to intensify our prayers so that we will choose aright.

“For those of you who have not joined any political party, please do so, because direct primaries may likely be adopted, which means every one of you will have the right to vote in those political parties.

source of the IGR? It is from you all.

“So, for IGR to go up, the citizens must be ready to play their own part. And, as a government, we must ensure that your resources are well managed.”
The governor, who also used the avenue to reiterate his administration’s resolve to take the hard decisions in the overall interest of Oyo State, said no matter the amount of criticisms, the government will not relent in developing the state.

“I want to give a glimpse of what we are trying to do. Some have criticised me on the Independent Power Plant project but I will still reiterate that Oyo State will have its own power plant. And from that we will expand it to industries and households as we move along.
“I want to thank you all for the support you have given us so far. I also want to appreciate our market women. Last week, I heard complains that people did not come to the market to patronise you.

“Anyway, last Friday, we paid December salaries so that people can come to buy things from you.
” But if you think you don’t want to spend it because of the fear of where to get another money, don’t worry, you will receive your 13th-month bonus on the 27th, which you can use for the New Year celebration,” he said.
Earlier, the Presiding Pastor, Living Spring Chapel, Pastor Femi Emmanuel, in his sermon, titled “why Jesus was born,” explained seven reasons why Jesus was born and the impact of Christmas.

He listed the seven reasons as including reconciliation mission; peace, hope, caring and sharing, freedom, to show the world the way to God, and the second birth.
The first, second and third lessons of the event were read by the Speaker of the Oyo State House of Assembly, Rt. Hon. Adebo Ogundoyin; a Judge of the Oyo State High Court, Hon. Justice Iyabo Yerima; and the Chairman, CPFN, Oyo State, Pastor Benjamin Akanmu, respectively.

were read by the PDP Chairman, Oyo State, Hon. Dayo Ogungbenro, Catholic Archbishop of Ibadan, Most Rev. Gabriel Abegunrin, and the President of CAC Worldwide, Pastor S. Oladele.
Also, the seventh and eighth lessons of the event were read by the Director-General of the Bureau for Public Procurement, Ms. Tara Adefope, who represented the Secretary to the State Government and the wife of the governor, Mrs. Tamunominini Makinde, while Governor Makinde read the ninth lesson.

Some of the dignitaries present at the service were former Military Governor of Oyo State, Major-General Oladayo Popoola, Evang. Bola Are, the chairman, Pilgrims Welfare Board (Christian Wing), Rev. David Moradeyo, members of the State Executive Council and traditional rulers, among others.