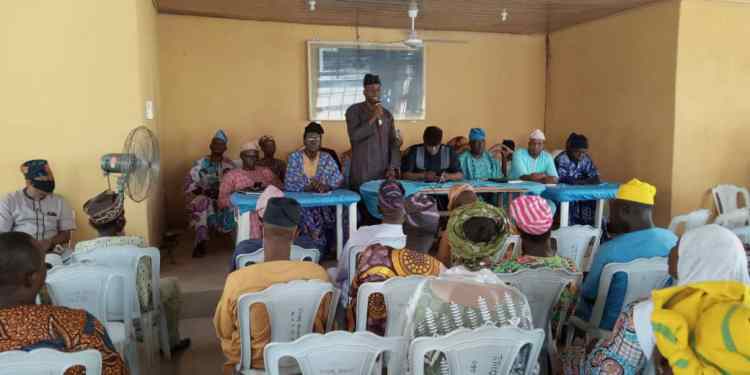 In a bit to ensure that the Oyo State Chapter of the All Progressive Congress (APC) have a formable structure that would oust the Influence of the ruling People Democratic Party in the State come 2023, the Oke-Ogun zone of the party met in Otu, the Local Government headquarters of Itesiwaju Local Government.

The enlarged meeting, which was held at the residence of immediate past commissioner for lands, housing and surveying – Hon. Isaac Ajiboye Omodewu, reminded the party faithful that the task of repositioning APC requires great deal of hard work, perseverance, honesty of purpose, unity, transparency and funding.

Alhaji Gbadamosi Abu, who presided over the meeting, said that the leaders resolved to build an indivisible, united and strong APC ahead of future elections.

Sources privy to the enlarged stakeholders meeting told our correspondent that the host – Hon. Isaac Omodewu, said Oke-Ogun APC is now one big family, considering the calibre of the party chieftains in attendance.
He expressed delight over the massive turnout of the party stakeholders at the crucial meeting, while reiterating preparedness of all stakeholders to work together in order to restore the lost glory of Oyo APC.

The two-term commissioner under the administration of late former Governor Abiola Ajimobi was quoted as saying, “APC is capable of regaining control of Oyo State from PDP.  If not the squabbles that divided the party prior the 2019 elections, no other party can withstand us”.

“I must commend the national and state leadlership of our great party for intensifying efforts to bring members together to work as a cohesive party”.

“What we are seriously doing now is building bridges of unity, as we are also seriously embarking on consultations with other critical stakeholders; comparing notes with all the aggrieved members so that we can unite together and forge ahead to form a stronger party”.

On the perceived factionalisation within the party in Oke-ogun, Omodewu said there was no faction any longer. According to him, all stakeholders and group are closing ranks to work for the party to achieve the desired goals in 2023.

The Chairman of Nigerian Communications Commission (NCC) and director, Centre for Presidential Studies at the Igbinedion University, Okada, Professor Adeolu Akande was absent at the meeting due to official engagement. Prof. Adeolu’s followers attended the meeting.

This newspaper understands that the Otu-born professor was a guest speaker at Precious Cornerstone University (PCU) Ibadan on Wednesday, 11th November, 2020.

This paper reliably gathered that immediate past Minister of Communications, Barrister Adebayo Shittu was also absent at the meeting due to official assignment in Abuja but he was adequately represented. The Saki-born politician has been pencilled down to host the next stakeholders meeting of the party in January 2021.