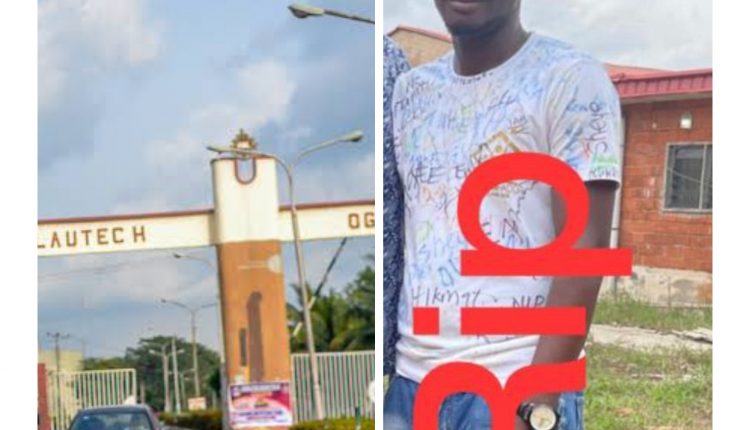 The Management of LAUTEC Teaching Hospital (LUTH) has refuted claims by the Ladoke Akintola University over the death od one Nifemi who fell into Soak-Away Yesterday, and was later pronounce death in a controversial circumstances.

Recall that this Newspaper had earlier reported how a 400level student wanted to switch on the electricity fell into Soak-Away and waa rushed to the LAUTEC Teaching Hospital.

The report which according to sources, says the decease was alive when they got to the hospital but the staffs refused to attend to him, claiming there was no Oxygen Until his eventual death.

Management of the Hospital have also claimed that the student bought waa already dead, but they could not tell the students who rush him down, and that was why they demanded that they speak with the Dean Student Affairs.

They said, speaking to the DSA was to convey the sad news of the demise of the student to him, but could not reach him, as calls put to his phone number was not reachable.

But in a Swift counter by the students claimed that he Nifemi waa very much alive when they brought him to the hospital, but the staffs refused to attend to him for long, and when they decided to take him to Bowen, they lost him along the road.

A source who said he’s a mate and a friend to the decease, narrated the story bitterly, he blamed the Hospital for lack of compassion and lakadasical attitude towards someone who needed an urgent medical attention but they could not fight to save his life, but rather claimed that they dont have Oxygen at the hospital.

He said ” If they’ve attended to him, he did be alive by now, but because of the poor medical attention, he has just lost a friend to a very sadden situation.

AKÉDE Ọ̀YỌ́ gathered that the incident occurred at his hostel along 1500lth in school area.

An eyewitness who spoke with our correspondent immediately after the incident explained that Nifemi was rushed to LAUTECH teaching hospital and wasn’t attended to.

He said: Staffers at the hospital said they have to get a call from the Dean of Students Affairs before attending to him and they had to take him to Bowen before getting there he is already dead.

Nifemi’s death has made some aggrieved students to threaten total shutdown at the Teaching hospital. They are protesting that their colleague could have been saved if the health institution had taken the case as an emergency and gave him the necessary treatment before asking of details like the DSA.

The health institution on the other hand are claiming that their request of the DSA was to relate the news of the passing away to an elderly person, that the student was brought in dead.

Meanwhile, efforts to speak with the Dean of Students affairs proved abortive as calls and texts sent to him were unreturned at the time of filling this reports.

It’s A Lie, Two Persons Were Kidnapped Not 18 Passengers In Eruwa—Oyo Police