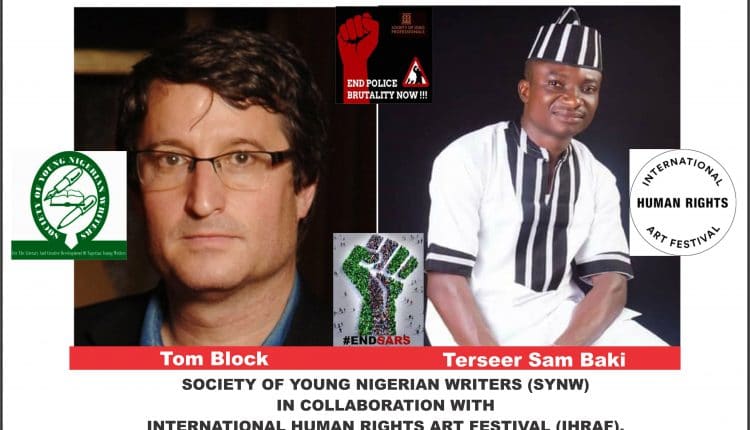 The organizers of the END SARS National Poetry Competition after receiving an overwhelming number of entries have announced the selection of two judges for the ongoing national poetry competition aimed at combating and campaigning against Police Brutality, Assault and Battery.  The ongoing END SARS National Poetry Competition is a joint effort between the Society of Young Nigerian Writers (SYNW) and the International Human Rights Art Festival (IHRAF), USA.

In a statement made available to newsmen in Ibadan, the President of the Society of Young Nigerian Writers (SYNW), Wole Adedoyin disclosed that they have received over 100 entries within two weeks from different entrants within and outside the country.

To evaluate and select outstanding entries for the top prizes in the competition, the organizers of the END SARS National Poetry Competition have unveiled two distinguished individuals with diverse experiences and expertise in literary art.

Tom Block is a playwright, author of five books and 20+ year visual artist. His plays have been developed and produced at such venues as the Ensemble Studio Theater, HERE, Dixon Place, Theater for the New City, IRT Theater, Theater at the 14th Street Y, Theater Row, A.R.T.-NYand many others. He was the founding producer of the International Human Rights Art Festival (2017), the Amnesty International Human Rights Art Festival (2010) and a Research Fellow at DePaul University (2010). He has exhibited his artwork and spoken about his ideas throughout the United States, Canada, Europe, Turkey and the Middle East. www.tomblock.com

Terseer Sam Baki is a celebrated poet and all round writer. He is the author of the poetry collection, ‘Euphoria of Sophistry’ and has published in several anthologies. Terseer Sam Baki is also the immediate past General Secretary of the Association of Nigerian Authors, ANA, Benue State chapter. He holds a degree in English Education and currently pursuing his Masters in Language Education at the Benue State University, Makurdi.

The long list of 10 outstanding entries are expected to be announced on the 17th of November, 2020.