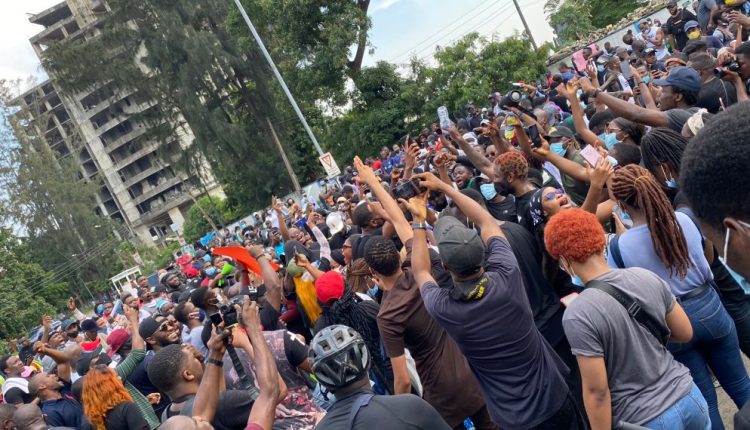 ……Governor Seyi Makinde confirms the death of the protester.

A young man, Jimoh Isiaka, who joined scores of others in Ogbomoso, Oyo State, to protest against police brutality has been shot dead allegedly by a police officer.

The police have used force to disperse largely peaceful protesters in major Nigerian cities including the capital, Abuja.

Thousands of protesters across Nigeria have been demanding an end to police brutality and called for the scrapping of the notorious police unit, FSARS (Federal Special Anti-Robbery Squad).

Officers in the unit have been accused of murder, extortion, harassment, assault and other crimes by several young Nigerians, many of whom narrated their ordeals using the hashtag #EndSARS.

Mr Isiaka was part of the protesters in Ogbomoso on Saturday.

Witnesses told Akedeoyo.com that the protesters were dispersed with gunshots and teargas as they approached a police building in Owode area of Ogbomoso. One of the bullets hit Mr Isiaka who was rushed to the hospital but later died.

He was buried Saturday evening.

After the shooting, the police spokesperson in Oyo State, Olugbenga Fadeyi, when contacted, affirm that the police did not shoot at the protesters.

“It was not true (that the police shot). I spoke with the Area Commander and he told me that nothing of such occurred. They did not shoot anybody. The police allowed them to protest for over one hour.

The police later issued a statement insisting their officers only fired tear gas to disperse protesters.

Despite the denial, however, Mr Isiaka died from gunshot wounds.

Mr Makinde, who condemned the shooting, added that seven other protesters were injured.

He said the victim died at the Ladoke Akintola University of Technology (LAUTECH) Teaching Hospital in Ogbomoso.

“I have received with deep sadness the news of the passing of one of our children, Jimoh Isiaka, who was shot during the ENDSARS protest in Ogbomoso. He later died at Bowen University Teaching Hospital, Ogbomoso, earlier today.

“Also, at this same protest, Abdulrasaq Olawale, Oluwadamilare Gbolohunmi, and five other persons sustained injuries and were taken to hospital for treatment.

“This situation is highly regrettable. I have contacted the Commissioner of Police, Oyo State, Nwachukwu Enwonwu, and other relevant agencies, and investigations into what led to the unfortunate incident are still ongoing. I pray that God grants the parents of Jimoh Isiaka the fortitude to bear this irreplaceable loss.

“The ENDSARS protests are a strong indicator of a systemic failure. It is a failure on the part of those who have been constitutionally empowered to protect the citizens. It again calls into question why State Governors are called Chief Security Officers of their state whereas, they do not have the necessary powers to control the police force.

“I will be paying a personal visit to the family of Jimoh Isiaka and I promise to pursue the investigations to a logical conclusion.

“Peaceful protests are a big part of our democratic process. The right to freedom of speech and assembly are guaranteed by our Constitution, and I will never support any attempt to rob citizens of their fundamental human rights.

“Again, I express my deepest sympathies to the family of Jimoh Isiaka, may his soul rest in peace,” the governor said.

President Muhammadu Buhari Friday promised police reform, but that has not deterred the protesters who demand that FSARS be scrapped.

The protest has gained traction among Nigerian celebrities, footballers, musicians and even international celebrities like actor John Boyega who have all shown support for the movement in various forms.

In Lagos, the protesters have vowed to continue until FSARS is scrapped.

In Abuja, the police fired tear gas and gunshots to disperse the protesters Saturday evening. They had wanted to continue the protest all night.

The protesters, however, show no sign of giving up and the protest is expected to continue across many Nigerian cities Sunday.

How long will the protest last?

Will the Federal Government acceed to their plights?

Only time can tell?