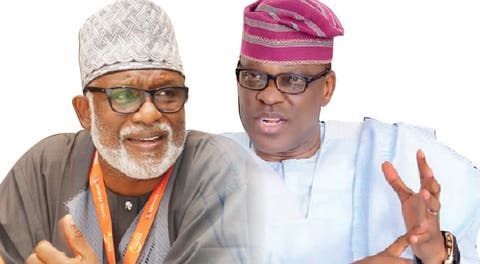 The two leading candidates in the Saturday Gubernatorial Election of Ondo State, Mr Oluwaroyimi Aketedolu of All Progressives Congress and Eyitayo Jegede of the Peoples Democratic Party, recorded overwhelming victories in their respective local governments of origin.

Akeredolu of the APC scored 36,953 in his Owo Local Government as against 5,311 polled by Jegede in the same council area.

On the other hand, Jegede scored 47,267 votes in his Akure South Local Government, while Akeredolu polled 17,277 votes.

As predicted, Idanre, the local government of the APC chairman, Mr Ade Adetimehin, which is one of the flashpoints of electoral violence, recorded the highest number of cancelled votes in the results released so far.

Other local governments where votes were cancelled were Ile-Oluji/Okeigbo and Ondo East due to non-use of Card Reader for accreditation of voters.

ONDO DECIDES: See Results Of Akure South LGA And Eleven Other as Released by INEC