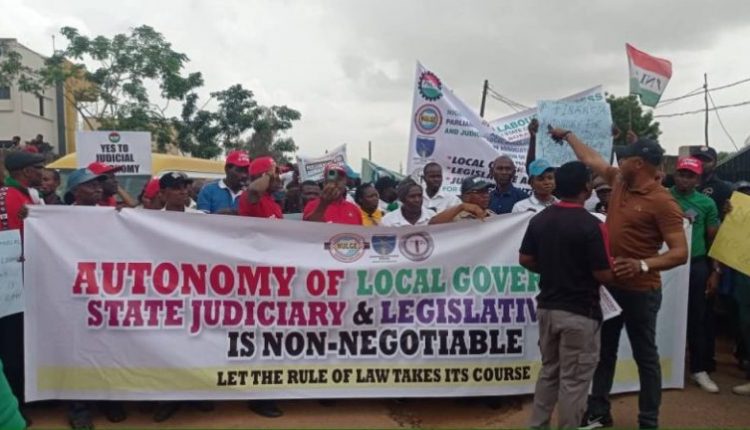 The Southwest zone of the Nigeria Labour Congress (NLC) comprising of —Lagos, Ekiti, Ogun, Ondo, Osun and Oyo, took to the streets of Ibadan to agitate against non- implementation of the financial autonomy for local government, state judiciary and legislative arms of government.

According to them, the implementation if passed by the National Assembly, would enable them perform their duties optimally.

It was gathered that the southwest rally kicked off at the NLC Secretariat in Ibadan and proceeded to the Oyo State House of Assembly, where the workers solicited for the support of the lawmakers to hasten the passage of local government financial autonomy bill into law.

The protesting workers were armed with placards with various inscriptions such as: “Autonomy of local governments, State judiciary and legislature is non-negotiable”, Financial Autonomy is what we want”, “Let the rule of law take its course”…e.t.c

In his address at the Labour House, the NLC Chairman, Oyo state, Comrade Kayode Martins described the current state of affairs with the administration of local government areas as “undemocratic and absurd”.

On his part, the Chairman of the Nigeria Union of Local Government Employee (NULGE) South West, Comrade Abimbola Babalola said local government should be a starting point for anybody interested in power, hence the need for autonomy.

While addressing the protesters, the Speaker, Oyo State House of Assembly, Rt Honourable Debo Ogundoyin pledged the readiness of the lawmaker to support the implementation of the bill.

He added that the assembly will convene the meeting of assemblies in the Southwest, to fashion out modalities for the realisation of the bill.