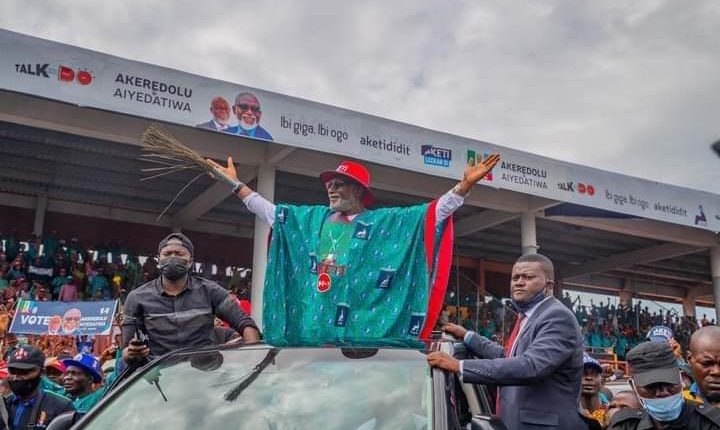 The Aare Bamofin of Ibadanland and a Chieftain of the APC in Oyo State, Niyi Akintola, has predicted the outcome of the forthcoming Gubernatorial Election in Ondo State.

Akintola disclosed this on a Whatsapp platform – Oyo State Politics, less than 72 hours to the election.

According to him, “Aketi will win in 15  local government areas of the state. He would also split the votes of Central Senatorial District comprising Akure South and North Local government areas, Ondo LGAs and would win Idanre hands down. Ondo North and South senatorial districts are sure bets for Aketi.

“This prediction of mine are based on solid facts and the prevailing political circumstances of the state namely, 1. The unprecedented superlative performances of  Governor Akeredolu in the areas of agriculture where the mainstream of the state economic power, apart from crude oil which is cocoa has received unprecedented boost of 8 million seedlings in the last 3 years, the increase of the state IGR from paltry N500m to over N2b per month, the governor’s aggressive fight against corruption and wastage, frugal spending of public funds, capturing of eligible taxpayers into the state revenue net and of course massive drive for other sources 0f income for the state.

“2. Massive employment opportunities created for a large number of unemployed youths through the inland revenue services that have employed about 1000 graduates of the Universities and polytechnics, Amotemun security outfits that has seen  thousands recruits going through the training drills and many graduating, the revitalization of the moribund chocolate factory,  the commencement of exploitation, mining and exploration of Bitumen in the state after several decades of obtainance 0f the mining licences by the state, massive constructions of roads in the state capital, Idanre, Ore, Ondo, Ilaje, Igbotako, Ese Odo, Ikare, Akungba, Owo, etc, and of course the turning of the state into industrial hub in the mode of Lagos and Ogun states.

“3. The Political tendencies in the state that has brought about the unwritten zoning arrangements.  This unwritten but credible arrangement has seen the central senatorial district candidate in person of Dr Segun Mimiko spending 8 solid years at the government house, with the Southern and Northern senatorial districts candidates spending only 4 years each on each previous outings.

“When Aketi wins the next  Saturday’s elections God willing,  the Ondo north senatorial district would have equal the central senatorial feat. This factor had worked against Tayo Jegede SAN before in 2016 and would certainly work against him this coming Saturday all things being equal. Most political leaders in the southern and northern senatorial districts of Ondo state viewed the Akure born Jegede attempt at governorship  ticket as aberration and an attempt to  upset the credible arrangement of power sharing in the state.

“Tayo and Mimiko are from the same Senatorial District (Central) with mutual mistrust  between Akure and  Ondo indigenes thus creating a dichotomy of disharmony between the two highly educated, urbanised and cosmopolitan communities.

“The two cerebral communities hardly toe the same Political lines. The Southern Senatorial District  is eagerly waiting for 2023 when the pendulum would swing in their favour and would not allow not even a battalion of PDP Governors  to truncate the existing arrangement,  hence everybody that is somebody in that Senatorial District is queuing behind Akeredolu. From Sola Oke SAN to Jimoh Ibrahim,  to Kekemeke, to Sola Iji the founding Chairman of the progressive in Ondo state since 1999, you can take their support and total  commitment to Aketi to the banks.

“Even,  the dye in the wool PDP man Kuku, would not trade away his Senatorial District advantage for Political allegiance.  They are all rooting for Aketi Victory and this will come on Saturday God willing. In the Northern Senatorial District, Political gladiators such as Professor Borroface, Baba Olanusi, Segun Abraham, Papa Akinyelure etc are not giving anything to chance. They also want a second term for their compatriot Aketi. Remember,  this is  a state where no town, geographical  demography or Senatorial District command any form of majority or advantage.

“The campaigns have been issues based, highly cerebral,  trust lawyers,  devoid of mud slinging, and generally peaceful.  Forget the pedestrian wolf crying of Gov Seyi Makinde who has been crying louder than the bereaved, the three Lawyer candidates have been very civilised and urbane in their comments and utterances.  I was present at the peace signing ceremony,  present at the Palaces of Deji of Akure, Olowo of Owo,our own Obat, The  Olugbo Oba  Akinruntan not as a spectator but as one of the 5 important APC dignitaries plying the trade of our party in canvassing for votes in the domains of these revered monarchs.

“I mean dignitaries that included Gov Akeredolu himself,  Governor Ibikunle Amosun, Governor Yahaya Bello, yours truly and Senator Iyiola Omisore to mention but a few. There are other minor factors working in favour of Aketi. These sundry factors include good rapport with the traditional institutions as epitomised by the verdicts of the traditional rulers  themselves,  the prompt payment of workers salaries and pensions including the 7 months salaries owed by Mimiko’s administration etc.

“Ordinarily,  payment of salaries and emoluments should not count as achievement in saner clime, but in a country of anything goes such as ours, it is an achievement which a politician would celebrate.  predict here and now that all things being equal,  Aketi, the “talk and do  of Ondo state” would win the Saturday 10th October election by over 60% of the total votes cast by the grace of  God. The title ” TALK AND DO” was conferred on Aketi by the traditional ruler of Akure land. Mark my word ,even if you  are a doubting Thomas,” he added.