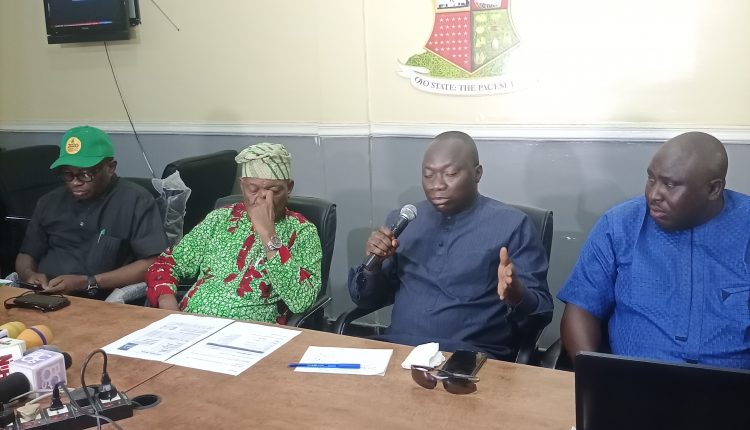 The Commissioner further stressed that the State government do not have, nor distribute rice as Palliatives during the heat of Convid-19. He added that the Warehouse belong to a private organization who is in charge of the distribution of the Palliatives across the country.

The Commissioner attributed the wide spread speculations as a calculated attempt by the opposition party to tarnish the public image of the ruling party. He further added that the State government is still expecting the promises made by organizations and government agencies of providing rice to the State government as Palliatives. He said the government will try in any way it can to assist in recovery of the looted palliatives.

Reacting to the speculations, Oyo state Chief Press Secretary, Mr. Taiwo Adisa, said its only those who don’t have the interest of this government at heart that will believe the padded story trending online. He also said it’s evidently clear the speculations were the works of mischievous set of people who are hell bent on giving the government of the day a bag image, adding that now the Vendor in charge has come out to clear all doubt, its another failed attempt by the failed opposition.

In his comment, the Hon Commissioner for information, Dr. Wasiu Olatunbosun said, even the blind can see all the good deeds of the government of Engr. Seyi Makinde, and as such all forms of politics of bitterness against this government will be effort in futility. He then urged the good people of the state to remain calm as the government will do all in its position to elevate poverty in the State.

Mr Alabi, the vendor said he received a distress call from the warehouse manager and he immediately alerted the ‘Operation Burst’, who have been helpful over the matter and have help to recover food stuffs worth about 135 bags, with a total stock of about 45million Naira.

Mr. Alabi also gave the reason that prompted the citizens of the community to embark on such action. He said they are aware of the transfer of rice from various state to the warehouse and the Lagos incident would have make them believe it was another case of looted palliative.

He show evidence of the receipt and supply to back his claim.

He said about 135 bags have been recovered so far with the help of the operatives of ‘Operation Burst’.

Reacting to the case of looting, the Oyo State Commissioner of Police, Joe Nwachukwu recounted the efforts of the Police Officers to dissuade the people from looting the food stuffs but they were so adamant and won’t care what would happen.