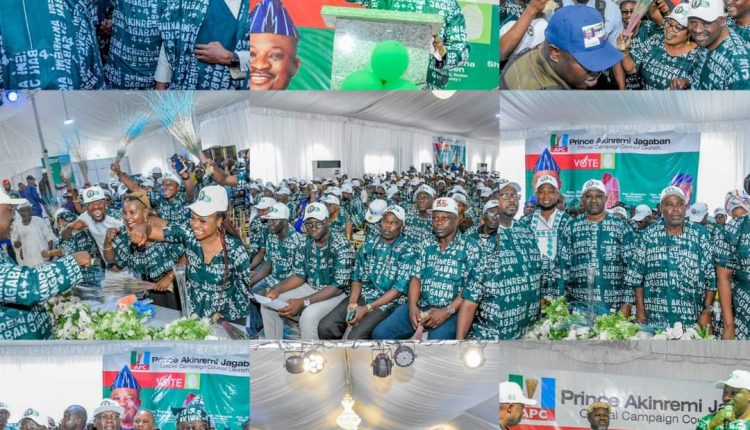 It was a colorful and exciting occasion as the Prince Akinremi Jagaban campaign council, set up to champion the re-election campaign course of Hon. Olaide Akinremi to return to the House of Representatives, was launched amidst cheers and fanfare, at the Victoria garden conference and events centre, polyibadan road, Ibadan, yesterday Sunday 22nd January 2023.

According to a statement by his SA Media and Publicity Micheal Adegbuyi, the event had dignitaries from around Oyo State who had come to celebrate the campaign council launch starting with the Oyo State APC Chairman, Hon. Isaac Omodewu, the Gubernatorial candidate of the APC in Oyo State, Senator Teslim Folarin, the APC Senatorial candidate for Oyo South, Barr. Sarafadeen Alli among numerous other political stakeholders.

Hon. Olaide Akinremi Jagaban who appreciated all members of his campaign council (670 members) for the excellent campaign work they had embarked upon prior to their appointment to serve on the campaign organization availed the opportunity to mention his all round effort which made him the masses favorite to return to the House of Representatives for Ibadan North Federal Constituency.

Prince Akinremi Jagaban who listed human capacity development as a key area of impact on his constituents stated that he has through personal and government efforts, facilitated and organized different training and empowerment programmes that has reached no less than 5430 of his constituents.

He also mentioned the construction of classrooms blocks with furniture and ceiling fans in no less than 19 schools; provision of over 2800 quality solar streetlights; provision of 12 industrial boreholes and counting, provision of transformers, construction of mega skill acquisition centre, modern town hall, almost completed cassava processing plant, among several other interventions in health, education, employments etc.

Hon. Olaide Akinremi Jagaban also made use of the avenue to campaign for Asiwaju Bola Ahmed Tinubu, stating that he is the right man for the job, one who has the capacity to guarantee the security of Nigerians and steady the economy of the country.
He also canvassed support for Senator Teslim Folarin and all other candidates of the All Progressives Congress (APC) across board.

Senator Teslim Folarin in his address appreciated Hon. Olaide Akinremi for being an outstanding House of Reps member, and for being a great representative of the All Progressives Congress (APC) in Oyo State and Nigeria at large. He echoed that Hon. Olaide Akinremi was largely instrumental to the stability of the APC in Oyo State during his time on the National Caretaker and Extra-Ordinary Convention Planning Committee of the APC.

The Prince Akinremi Jagaban campaign council comprises 11 directorates, and the appointed Director General is Hon. Tosin Ayoade, while his Deputies are Hon. Gafar Ojetola and Alhaja Tairat Adeyemi. The secretary of the council is Prince Adedamola Layade. Also appointed are Alhaji Kayode Adanla who is the Director of Strategy, Hon. Bamidele Ogunleye as Deputy Director of Strategy, and Hon. Akeem Adebiyi as Secretary of the Strategy committee.