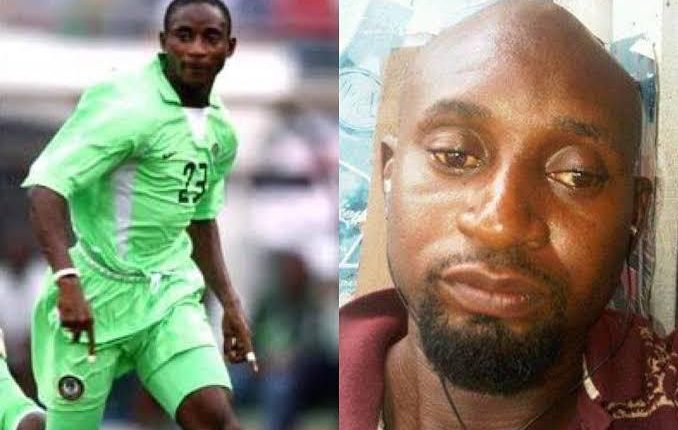 Of these stories is that of a Nigerian ex-footballer, Femi Opabunmi, who is currently based in Ibadan. It is an account of how this talent in a person became irrelevant and had to stop doing what he loves doing most.

Born in Lagos on 3rd of March, 1985, Femi Opabunmi, 37, was an ex-footballer from Nigeria, who had made it to stardom in international football.

Opabunmi at the age of 16 finished the 2001 FIFA U-17 World Cup in Trinidad and Tobago as the second highest goalscorer and the third best player of the tournament. The following year at 17, he was part of the Super Eagles to the 2002 FIFA World Cup.

Opabunmi played for a few clubs, including Shooting Stars FC, Grasshoppers Zürich, Hapoel Be’er Sheva and Chamois Niortais in France for like one season.

How the Happy Story Turned Sour?
A few years into a growing football career, Femi Opabunmi became blind in the right eye, a condition that mysteriously could not be cured by the best medical practitioners. The eye infection was taken to different hospitals, different professionals and all could not avail a possible solution.

In his word, “When the eye problem started, I woke up one day and I just saw the cloud, I was not seeing well, then I went to see a doctor in France for Porche, the doctor said it was a case of glaucoma. They said my case was complicated that they don’t understand everything. We went from one place to another before I returned to Nigeria and started going from one place to place to see native doctor, anybody”.

The embattled Femi Opabunmi was forced to retire from football in 2006 due to serious glaucoma and resides in his bungalow in Ibadan with his wife and three children, the only property he owns, the only thing remaining after he sold everything. He is now totally blind in the right eye.

Report by people who had encountered the embattled man claimed Opabunmi sometimes goes on the street to beg for money to sustain his family and bring food to their table.

Another report claimed that Opabunmi never made millions, the highest he made weekly is a thousand pound which he used to build the only house he has.

Opabunmi needs help!
Will you?