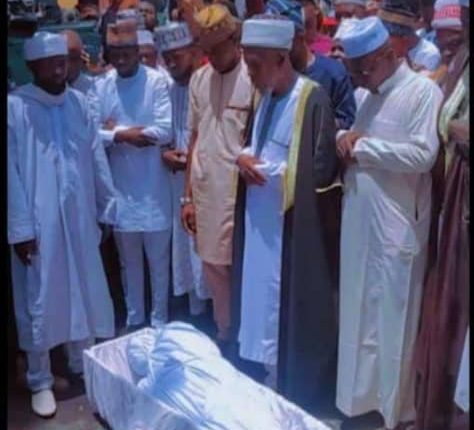 Traditional worshippers have condemned the open display of the corpse of late Alaafin of Oyo, Oba Lamidi Adeyemi, during the Islamic funeral prayer.

They said the act was against the tenets of traditional respect for a dead king.

They also enjoined all Yoruba monarchs to emulate the late Adeyemi in promoting traditional religion, which is the basis of their crown.

The traditionalists recalled the late Alaafin never minced words in condemning open display of Yoruba Obas” remains for any purpose while alive.

They pointed out he even went against attempts by Ogun Assembly to alter the State’s burial rites procedure to weaken the power of traditional religion and practitioners in taking the needed roles at the burial rites of any deceased king.

The body, in a statement, on Sunday, sent condolences to the children, widows, Oyo indigenes, the Yorubaland in general and the Sango devotees worldwide for losing one of their members.

The statement said the maturity showed by the Sango worshippers would go into history as worthy of emulation, asking all traditional worshippers to start different appeasements to smoothen the late Alaafin’s transition to the great beyond.

“We send condolences to the children, widows, the Oyo indigenes, Yorùbá land in general and most especially, the Ṣàngó devotees worldwide who have just lost one of them. In fact, Oba Adeyemi was a true devotee of Ṣango and that was why he joined the ancestors on Sango worship day.

“It is rather disappointing to have seen the corpse of our revered Alaafin being displayed all over the internet, it is saddening and we want this to be on record that we as a body are protesting this act, we do not want our children and grandchildren to question us in the future that we did not act or talk.

“The same disparaging act was witnessed during the burial of late Olubadan of Ibadanland, Oba Saliu Adetunji and we made our minds known as well, this is a trend that must stop or we will all be contributing towards the total annihilation of our tradition and culture, our Yoruba monarchs and kingmakers should please make efforts at remedying this malady.

“However, we extol the Ṣàngó devotees for being tolerant to allow the Muslims and Christians to do the initial prayers before the final rites commenced, it is a good sign of religious tolerance that we have been advocating.

“We also use the opportunity to enjoin all the Ọba in Yorùbáland to emulate Ọba Lamidi Adeyemi in the promotion of Yorùbá traditional religion which is the basis of the crowns on their heads.”

Adeyemi, breathed his last on Friday at 83 after ruling for 52years.