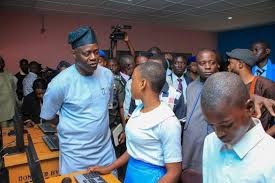 The Oyo state chapter of Nigerian Union of Teachers (NUT) has commended the Governor, Seyi Makinde for the prompt release of the 2021 Leave Allowance for teachers in the state particularly those in public primary schools.

The teachers union also commended the Chairman, State Universal Basic Education Board, Nureni Adeniran and the leadership of the union in Oyo state for the joint efforts that culminated into the prompt release of the funds.

A statement by the union in Oyo state by its State Assistant Secretary, Amuda R. Adegoke on behalf of the State Secretary, Comrade N. M. Abdullahi confirmed the development.

The union urged concerned public school teachers to exercise patience a little bit for the proper documentation and final processing by SUBEB before disbursement commences.

“It is considered of a great necessity to bring to the awareness of the generality of teachers, particularly public primary school teachers of Oyo state that the 2021 Leave Allowance has been released to SUBEB for onward payment into beneficiaries accounts.

“It must also be acknowledged that the proactiveness of the NUT state leadership which saw to a face to face interaction with His Excellency, Engr. Oluseyi Makinde, in addition to the holistic efforts of the SUBEB management under the Chairmanship of Dr Nureni Adeniran culminated into this lofty achievement.

“Expectedly, the concerned teachers shall be credited as soon as the SUBEB concluded the required administrative process which, on good account has reached an advanced stage.

“Consequently, the would-be beneficiaries are enjoined to wait awhile for the needful to be done.” The union stated.