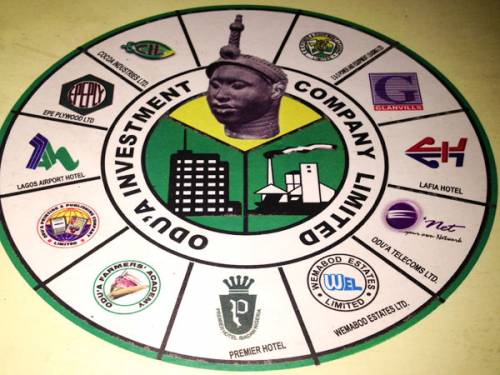 The National Industrial Court in Ibadan has fixed December 9 to hear an application seeking to restrain Odu’a Investment Company Limited from illegal Suspension of Mr Abiodun Adedeji from the company.

The News Agency of Nigeria (NAN) reports that Adedeji through his counsel, Mr Adeboye Julius had sued Odua Investment Company Limited , Chairman Board of Director of Odua, Dr Segun Aina, Group Managing Director, Mr Adewale Raji and 7 others over unlawful suspension of his client.
It would be recalled that the claimant’s counsel had informed the court through the court summon that his client was unlawfully suspended on June 25 by the Group Managing Director (GMD) of the company without pay.

He said that the company later terminated the appointment of his client on Oct..25 after been served with the court processes on Oct.23.

It would be recalled that the security personnel in Odua Investment Company allegedly assulted two ballifs of the court in an attempt to serve court processes to the company.

Justice Peter Dada had on Oct.24. ordered the company to make a public appology in the national Newspaper and as well compensate the assulted ballifs.

At the resume hearing of the case on Wednesday, Counsel to the Company, Mr Chukudi Maduka, informed the court that the company had complied with the court directives

Maduka said that the company has issued a draft of N500,000 to each of the ballif assulted by the company’s security personnel.

In his remark, the claimant’s counsel, Julius, comfirmed to the court that the company has complied to court directives.

Julius urged the court to fixed the case for hearing of the application.

The Judge, then adjourned the case till December.9 for hearing of the application.