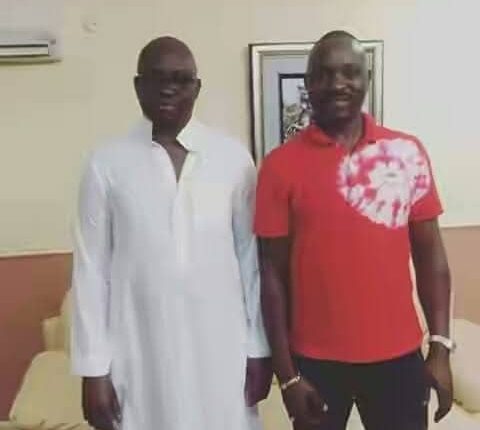 My Brother had to beg Baba Ladoja before Makinde Could Win 2019 Oyo Election, I pray he doesn’t get 2nd Term Bid – Fayose’ Brother (VIDEO)

The junior brother of immediate past Governor of Ekiti State, Ayo Fayose, Mr. Isaac Fayose, on his Facebook took a swipe at the Oyo State Governor for being ungrateful to his brother, despite his concerted roles he played before Gov. Makinde could emerge in 2019 Election.

Recall that the Chief Adebisi Olopoeyan had, in a radio program during the week narrated how Fayose came from Ekiti State to coordinate the flagged off ceremony of Gov. Makinde’s gubernatorial campaign in 2018.

The Chairman of Anis Security and younger brother to the immediate past governor of Ekiti State, Ayo Fayose expressed his dislike for Oyo state governor, Seyi Makinde, said he wished that Makinde lose his second term bid come 2023.

Isaac in a minute, 16 seconds video uploaded on is Facebook page said if not for him and his brother Fayose in 2017 who went to beg senator Rashidi Ladoja to work for Makinde, he ( Makinde ) wouldn’t have bacame a governor.

We Have No Patient With Case of Yellow Fever At UCH, Oyo—CMD