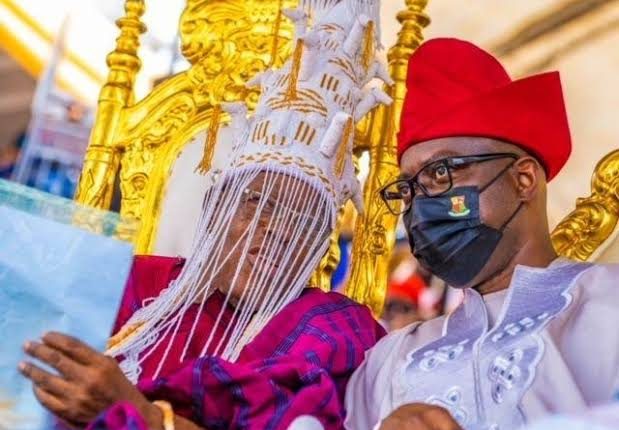 Oba Balogun emphasised that the president needed to consult with Makinde on how to make the country safer and better secured.

The monarch made this known while speaking with The Guardian in an interview, expressing worries about the daily sad occurrences of safety breach, especially in the northern part of the country.

He lauded Makinde for his various initiatives to make the state safer and secure and said if Buhari could borrow a leaf from him on how he has been carrying out his responsibilities in that regard, Nigeria would be better than it is now, security-wise.

‘’The governor of the state has been fantastic in his approach to both security and education. The Iwo-Road axis has become more secure and safer than it used to be, to the governor’s credit.

“I am aware of his efforts to improve the efficiency of the Western Nigeria Security Network (Amotekun) in the state through provision of additional vehicles, as well as recruitment of additional 500 officers.

“These efforts, I’m aware, are second to none in the entire Western region, where Amotekun operates. This is a great attitude and disposition towards the safety and security of the residents, which deserve commendation for the state governor,” Oba Balogun said.

The Olubadan, who advised that the Amotekun should not transform to state police as being canvassed in some quarters said, “We should protect Amotekun by leaving it as an independent security organisation without the encumbrances of the Nigeria Police Force.”

He charged the governor to remain steadfast in his commitment to bequeath a secured and safer state to the residents, by not pandering to the antics of the naysayers that would always look for loopholes in any of his policies, to capitalise on and create fear in the people.

“I enjoin the governor to be proactive and always be a step ahead of the criminally-minded people, whose stock in trade is violent and crime, with firm assurance of our support and co-operation at the traditional level as the liaison between the government and the people,” Olubadan stated.

Oyo Group Kicks As Alleged Killer Of House Of Reps Member, Sugar Declares To Run In 2023