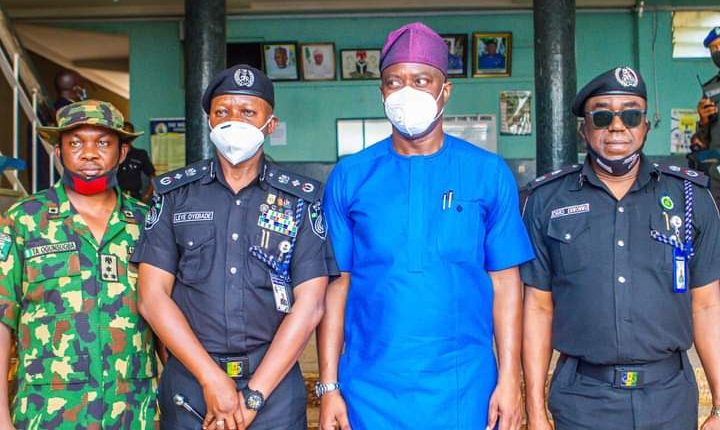 Oyo State Commissioner of Police, Mr. Joe Nwachuku, has urged Police officers to go back to their respective places of assignment following the visit of the State Governor in assurance of optimum support both from the State government.

This was contained in a statement made by the Chief Press Secretary to Governor Makinde, Mr. Taiwo Adisa quoted the CP as saying this on Monday when Governor Seyi makinde visited Oyo State Headquarters of the Nigeria Police Force, Eleyele, Ibadan.

He said, “As a matter of fact, October has come and gone. It was a bad month. It was a black month. It was a very sorrowful month, not just for Oyo State but for the entire federation. Granted that we have suffered a lot of losses in terms of buildings, burning of police stations, loss of men, vehicles and personal belongings, that is a price one has to pay by way of what we call professional hazards.

“But that does not mean life will not continue. We have to put all that behind us and forge ahead and be sure that today, being the first working day in the month of November, that we will do our best to be sure that Oyo State will continue to be a state with one of the lowest records of crime.”

“I further want to urge each and every one of our officers here that when you leave here, you should go back in full confidence that you will give your best to the communities and your areas of responsibility.

“You should not be intimidated and you cannot abdicate your responsibility, which is that Police, as a lead security agency, cannot abandon your duty post and expect those who are not trained to do that job to come and do it for you.”

The CP added that there would not longer be any forms of intimidation or harassment of the members of the public by the officers of Nigerian Police Force anymore. He further disclosed that the Governor has provided facilities and other necessary Security appliances copied with the welfare packages for all Police officers in the State.

He said: “He (Governor Makinde) has provided us with vehicles, telecommunications, a lot of logistics including welfare allowances to boost the morale of the officers,” Enwowu said.

Contributing to the new development, the Garrision Commander 2 Division, Nigerian Army, Brigadier General Ogunsugba said: “You have received enough tonic to come out of your shell and do the job together. The job belongs to us and we have nobody to call apart from us. We will not sell this country or allow this country to be taken over by miscreants.

“So, please I don’t want us to start quoting one law that is outdated. The current law now is the IGP’s pronouncement, which everybody can hear clear and loud. You have been empowered to do your work.

“The other aspect is my General Officer Commander’s comment when he came here. He said you are not alone. We are with you day and night. And for those of you who are in the town, you would have been seeing us in some of your deployments. We have been patrolling together. And we have been saying that an injury to a policeman is an injury to a military man. That shows you are not alone. So, what I will tell you is to come out. It is time. Nigeria belongs to us. Oyo State belongs to all of us. We must come out to do the job.”

Google sets to Improve Small and Medium Businesses in Nigeria with $3.7m—Sunday Dare