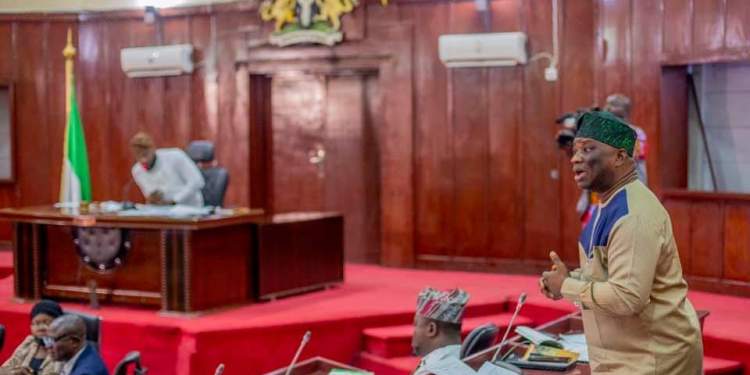 Each lawmaker who rose on the floor of the Assembly, rendered words and tales about how the three personalities, in different ways, impacted lives, develop their various domains, lived fulfilled lives and lived in true service of mankind.

According to the Nigerian Tribune, the rendition of tributes was followed with a one minute silence called by Speaker of the Assembly, Honourable Adebo Ogundoyin.

In her tribute to a man, she described as her “leader, godfather, mentor, destiny helper,” Honourable Olawumi Oladeji of Ogbomoso North constituency lamented the loss of a “gem, colossus, a jolly good
fellow” in Alao-Akala.

She noted that Alao-Akala stood out as a man who believed in local content in governance, whose politics was ensuring people prospered under him such that many became millionaires through his populist programmes.

“He was one politician who knew too well, how to be a political opponent without being a sworn enemy, a lesson that many have failed to learn. Alao-Akala had an incredible ability to forgive and many took advantage of it: he quickly let bygones be bygones.” Oladeji added.

Speaking, Majority leader of the Assembly, Honourable Sanjo Adedoyin described the late former governor as an encyclopedia of grassroots politics and one who was keen on development across the state.

Adedoyin prayed the state government to consider naming after Alao-Akala one of the state institutions: Ogbomoso-Iseyin road, Oyo State College of Agriculture or the Ladoke Akintola University of Technology Teaching Hospital.

Minority Leader, Honourable Asimiyu Alarape, who served as Political Adviser to Alao-Akala, remarked that the former governor was a socialist, colossus and one who raised the economy of Ogbomoso, his hometown, and Oyo State, at large.

In his remarks, a member representing Ogo Oluwa/Surulere constituency, Honourable Simeon Adegbola said there was no one like Alao-Akala in the history of Ogbomoso since the death of another Ogbomoso indigene, Samuel Ladoke Akintola in 1966.

They, particularly, praised the late Olubadan for standing firm amid pressure from the last administration to thwart the Olubadan chieftaincy ascendancy.

A tribute by Honourable Peter Ojedokun of Ibarapa North/Central constituency in conjunction with Speaker of the Assembly, Honourable Adebo Ogundoyin was also read for the late Ashigangan of Igangan, Oba Olawuyi Adeoye.

Ojedokun, who read the tribute, noted that the late Ashigangan was honest, hardworking, Godfearing, kindhearted, selfless, whose reign brought significant development to Igangan.

Specifically, Oba Adeoye was praised for a reign that saw the siting of a federal science and technical college in Igangan, completion of Igangan town hall project, the establishment of a Divisional Police headquarters in the town and looked forward to the commissioning of the ongoing construction of Army Barracks in Igangan.

Oyo Speaker Calls for Renewed Commitment
The Speaker, Oyo State House of Assembly, Hon Adebo Ogundoyin has called for renewed commitment and zeal amongst the state lawmakers in the new year, 2022

The Speaker made the call Tuesday while welcoming his other colleagues and staff and management of the state House of Assembly to the first plenary session in the new year.

Hon Ogundoyin urged the lawmakers to double up their efforts in order to accomplish and complete more legislative duties and oversight functions this year.

He assured that the 9th Oyo State House of Assembly will continue to set the pace for other State legislatures to follow.

” I want to welcome my colleagues and the entire staff of the Oyo state House of Assembly back to legislative business. We went on recess on the 22nd of December, 2021 and now we are back to work again. I know we are poised to do more in terms of law making, passage of bills, making of motions and resolutions as well as attending vigorously to our oversight functions” The Speaker said