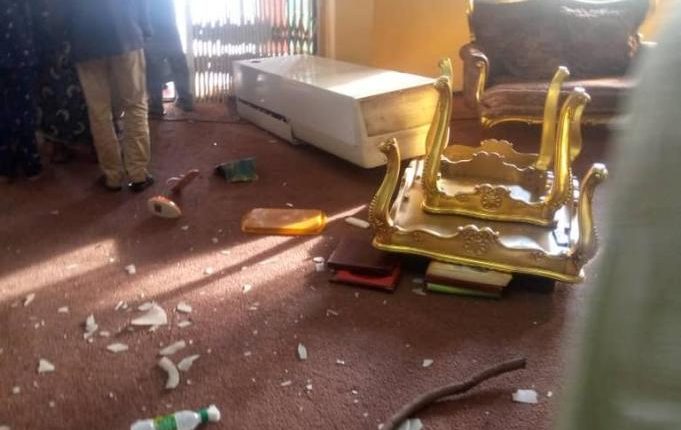 Soun’s Palace Attack: Sen Lanlehin Apologises On Behalf of Perpetrators, says it’s One price to Pay As a Leader

A Chieftain of the Oyo State Chapter of All Progressive Congress and a governorship aspirant in 2019 election under the platform of ADC, Chief Olufemi Lanleyin has apologized, on behalf of the aggrieved youth who embarked on a destructive mission to his ancient palace of Soun of Ogbomosho, on Monday over the alleged killing of a young fellow, Jimoh Isaq on Sunday.

He also urged the monarch to overlook such ugly incident adding that it is one of the price to pay as a leader and father.

He finally urged the federal government to hasty up with the reformation of the Police force adding that this would enhance the professionalism of the Force.

His statement:“The recent attack on the Palace of the Soun of Ogbomoso, Oba Jimoh Oladunni Oyewumi, Ajagungbade III, allegedly by some EndSARS protesters, is highly condemnable, and totally uncalled for.

“While one appreciates the mood of the times, and the reasons adduced for the protest, especially the equally condemnable killing of 23-year old Jimoh Isiaka, allegedly by the Police during the EndSARS protest in that ancient town, yet, transferring that aggression, on a revered location like the Soun’s Palace, and a revered personality like the Soun, is totally out of place.

“It is important for Nigerian youths to realise that as much as democracy allows for the unhindered expression of opinions, through protests, debates or constructive criticisms, the fact still remains that such must be done within the confines of the rule of law and respect for the boundaries of the other person. On no account must such be breached, for that will also represent an illegality, in the face of efforts at curtailing another illegality.

“On behalf of the perpetrators of this absurdity, I sincerely apologise to our Baba, Oba Oyewumi, reminding him that as father of all, incidences like this are bound to occur, he can only count it, as one of the prices to pay, as a leader and father of many.

“On the whole, I once again call on the Federal Government to ensure a speedy, total and workable overhaul of the entire policing structure in Nigeria, so as to bring to an end, cases of brutality, high handedness and disrespect by supposed defenders of the law against hapless citizens whom they are expected to protect, in the first instance. Doing so, will nullify the basis for this kind of protests and prevent other spin-offs like the destruction of a historical monument, such as the Soun’s Palace.”

We Will Release Arrested Protesters Without Being Charged—Makinde Assures Protesters